Study of the Raft (Colorado Prize for Poetry) 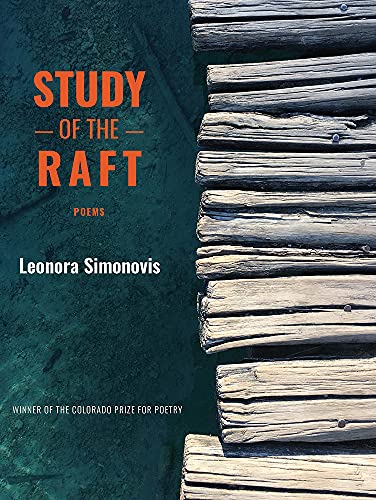 “Simonovis’ succinct work and powerful lexicon carry the painful images of the hyper-reality of a totalitarian regime. She threads this trauma with delicate verses to hold the escaping raft, which the reader can use to navigate the treacherous landscape of political poetry.”

Study of the Raft is a carefully crafted, delicate, and intelligent account of what it means to leave a homeland with a one-way ticket. In her poetry collection, Leonora Simonovis takes her readers through the exile journey back to the intimacy of family secrets and to the darkest chapters of Venezuela’s contemporary history. The poet relies on striking imagery and succinct language to create a powerful poetry collection.

Study of the Raft is a book in three parts simply named with numbers in Spanish, UNO, DOS, TRES, like an ultimatum, like the number of minutes the speaker has been given to pack and leave the horror behind.

In UNO, Simonovis starts by earning the readers’ trust. First, in “Water Rituals,” the poet shows us the ritual of death, washing the body of her grandmother along with the secrets the old woman kept.

our dolls with holy

Water. Now all we

Then, in “Of Mouth and Tongues” and “Father-Lengua,” Simonovis also presents the subtleties and dangers inherent to speaking the language of the diaspora.

“about a man found this side

Thus, the readers are led to trust this poet who is not going to keep secrets and who is going to use her language, despite the risks.

And just like that the first secret appears in the contrapuntal poem “Still Life with Baby.” There, “inside Abuela’s armoire/ floating / in a jar of alcohol” a seven-month-old miscarriaged fetus, “Abuela’s guilt” reveals itself to the family.

Once the poet-reader trust has been established, the poet throws in the scalding truths of Venezuela’s failed attempt at a revolution. In “Arabian Nights (Remix),” the parents warn the young poet, “if we don’t come home, someone will keep you safe.” Several poems in UNO speak about Chavez’s lure in the geopolitical landscape of the United Nations. “Everyone believes a silver-tongue,” says one character.

Then the readers sees where the political becomes personal and intimate. In “It’s Not an Act” and “Been Prey for Most of My Life” readers learn of the constant threat to the woman’s body not just in Venezuela but in all Latin America. In “Gospel” the poet explores the gun violence in Caracas and its effects on the lowest socioeconomic strata of the country.

DOS is a single poem, “Diaspora Suite,” where the two worlds finally merge in one single reality, the woman victim of violence, now becomes a political refugee.

her home and two children

in Venezuela after being kidnapped,

In TRES, the political crisis becomes a family issue. In “Further Study of the Raft,” a poem in eight couplets, the exodus of Venezuelans is represented in the fragile hold of a makeshift raft crossing the Caribbean, “people move / from one collapsed / world to another.” In “At the Airport” the woman is still subject to the unwanted touch of a man, even as she tries to escape the inferno with “a one-way ticket.”

The reader observing the “Venezuelan Mosaic” gets fragments of the hyper-reality of a country standing up to a brutal regime, where the “evidence is in the pit.” This “pit” could be interpreted as Venezuela’s now infamous torture chambers.

Then, it hits the reader, it is personal because this is the poet’s family: political prisoners, exiles, disappeared. In “Still Life in Exile,”

your cousin died in jail

I left a country where politicians

play in red berets while people

die for a pair of shoes.

. . . people are disappearing. You can’t

make this up, yet people write books about it.

The silence of citizenship.”

Then Simonovis’ voice returns to the intimacy of the first poems, to talk about Aunt C, her attempted suicide, her apparent madness or absolute wisdom, the reader can’t know. The speaker’s visit to the dentist reminds the readers to use the [mother] tongue, “peel back / the skin of syllables” to bridge the distances in exile.

And a visit to Museo Reina Sofia in Madrid brings another perspective of Picasso’s Guernica, in “Bellum Civile,” “a civil war is kin against kin.” The horrific paradigm built in the last stanza of this poem might be the one single explanation of the painful, yet vibrant, collection.

of the bomb—the eye is the bomb. Horror

FAVOR NO TOCAR/ PLEASE DO

NOT TOUCH. What is there to touch?”

In “Still Life with Smoked Landscape” the speaker reflects on the difficult job of creating awareness about a political crisis. The prevalent narrative “chases away the voices.” “Fire can speak but we’d rather not hear.” The poet observes through her window how the transformations—the monarchs—lose their wings.

The collection ends like a requiem to the lost mother, in “Questions” and the smells the poet, now mother wants to leave to her son:

“the scent of fresh grass

Relying on the economy of words and on the images of the Venezuelan diaspora that the poet carries with her, Simonovis crafts Study of the Raft from the unique perspective of one who has been witness and participant of a country falling apart. The poet gains the readers’ trust with an intimist approach, which she uses effectively to deliver a powerful political testimony about the horrors afflicting Venezuelans under the failed revolution. In the end, she closes the collection returning to the familiar, the coziness of her child’s bed, reminding us that even in the safety of an exile, the diaspora is never truly free of the fear of losing the beloved.

Simonovis’ succinct work and powerful lexicon carry the painful images of the hyper-reality of a totalitarian regime. She threads this trauma with delicate verses to hold the escaping raft, which the reader can use to navigate the treacherous landscape of political poetry.