The Study of Animal Languages: A Novel 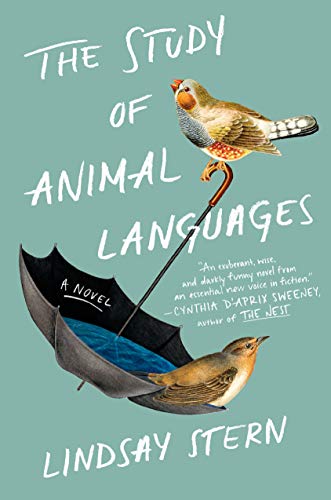 “a smart, entertaining and highly readable novel, one that should appeal to a diverse audience.”

Songbirds are the primary animal model used to study learned language acquisition. Much like humans, who must learn to talk, birds are not born with the ability to sing. Rather, they learn their songs by listening to adults during a critical period after birth. Just as in human babies, birds experience a babbling period, approximating and practicing sounds as they develop the nerve and muscles connections that allow them produce and repeat adult sounds.

The process of song maintenance in birds, and language in humans, is an ongoing one. Birds (and humans) constantly listen to themselves singing (talking), comparing the sounds they make for the template that was set down during development. A bird that becomes deaf will lose its ability to sing a “correct” song.

In the novel, The Study of Animal Languages, Lindsay Stern takes this model system, which has produced a great deal of understanding about learned language acquisition, memory, and to some degree communication, and uses it to probe the pivotal days in a marriage between a bio-linguist, Prue, and her philosopher husband, Ivan.  As a parallel, if one becomes “deaf” to a spouse, one loses the ability to not only listen, but to reply and love legibly.

As a biologist, who has studied bird song and published a novel centered on this subject, this reviewer is always intrigued by fiction that takes on scientists and their study subjects. Stern has achieved an energetic and entertaining novel, which, though comical, tells the sad story about communication breakdown, and the ways in which relationships, especially those of physical and intellectual proximity, can breed a type of emotional distance.

In academic marriages, it is common to share work, including reviewing papers prior to submission or talks before giving them. Who better to review one’s work than a trusted, smart partner who will be honest as well as constructive? Such is not the case with these two. Not only has Ivan not read, or been asked to read, the lecture, hearing Prue present it in public shocks him because she takes an audacious stance, suggesting that the birds speak a kind of language, and challenging other fundamentally accepted ideas in animal behavior, including ethics commonly accepted in animal experimentation.

The fact that she has not shared her frame of thinking with him is pivotal. Suddenly, a rift that existed quietly in this marriage, because there is no evidence that they’ve communicated while moving apart, becomes apparent to Ivan. The public lecture is embedded as a chapter of the novel, and is one of the more intriguing moves that Stern makes in the book, which is otherwise told from Ivan’s singular and restrained point of view.

In this novel, we witness the frictions that sometimes exist between the internal stories and the external data points of our lives. Though she often depends on facile academic stereotypes, Stern reveals the ways in which scientists may try to deploy objective methods, but are ultimately human. Our ability to describe and understand the world at an intellectual and theoretical level, is not always transferable to ourselves as individuals nor in our relationships with others.

As Prue says to a question after her lecture, which further demonstrates their inability to communicate, “My husband works on this, actually—it’s a problem in epistemology: the gap between our data and the truth.”

The book is further sustained by a set of diverse characters, including an insightful, but flighty father, a smart, seven-year old niece, typical university colleagues and a misbehaving parrot.

Told from Ivan’s perspective, in The Study of Animal Languages the reader empathizes largely with him, while Prue seems distant, distracted, and possibly in love with another. She is absorbed by her work, no longer communicating with him, yet willing to have him take care of her unstable father as well as a niece and other household responsibilities. She comes off as disinterested, almost exploitative, perhaps in the same way she rails against scientists for exploiting the animals they study.

All of this is fine, except that lack of Prue’s character description and development weakens the novel’s core themes. The feeling throughout is that the author’s intention was to craft Ivan as an unreliable narrator. It is questionable whether the moves throughout the novel substantiate this kind of complexity in narrative voice and plot. Nonetheless, this is a smart, entertaining and highly readable novel, one that should appeal to a diverse audience.

Sylvia Torti's most recent novel, Cages, is a finalist for a 2017 Foreword Indie Book Award for Literary Fiction. Her short fiction, book reviews, and both literary and scientific essays have been published in anthologies, journals, and magazines. She is dean of the Honors College at the University of Utah.