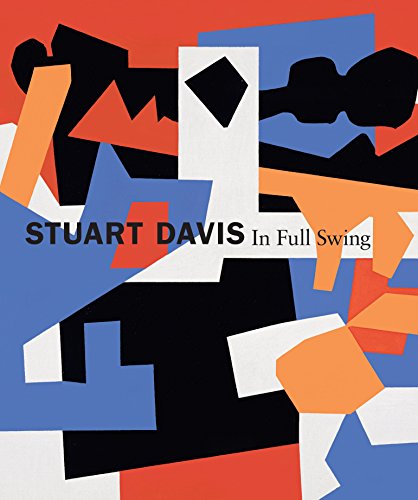 To most of us, Stuart Davis’ paintings are a joyful expression of color and frolicking graphic forms that seem to explode on the canvas in unscripted rhythms. To art critics, however, Davis was supremely adept at bridging the gap between the worlds of popular culture in the 1920s and abstract painting.

For admirers of Davis’ work it is easy to view him from the perspective of a groundbreaking and seminal graphic designer. His solid color shapes, tightly controlled color schemes, bold lines, flattened perspective, and even incorporating his signature as a graphic element in the frame, lend itself to that kind of interpretation.

Stuart Davis: In Full Swing paints an excellent picture of Davis’ conscious breaking away from the influence of turn-of-the-century realism as depicted by John Sloan and George Bellows, to explore his own path. It would be one that would combine a healthy cognizance of the social realities of 20th century America as well as the immense strides being made at the time by European artists such as Gauguin, Picasso, Matisse, El Lissitzky, Man Ray, and others.

For the 21-year-old Davis, his initial eye-opening shock came in the form of the 1913 Armory Show in New York City, which exposed him to the work of European cubists, fauvists, and futurists. It impressed him with a freedom of color and forms not common to Social Realism or the Ashcan School. For Davis it was “ . . . a World’s Fair of ideas, a complete bombshell . . . that had no counterpart in American art.”

As exemplified by his “American Painting” (1932, Joslyn Art Museum), by the early 1930s Davis had shifted away from the formalism of cubism, with all vestiges of recognizable imagery gone in favor of solid color, rhythmic dynamic shapes, varied color schemes, and bits of typography or phrases to create a modern yet nearly timeless aesthetic that reflected the America he experienced and the jazz he loved.

Davis' development is shown in 100 works and cited from his own journals to create an understandable sequence of events that details an evolution from his cubist influenced work of the 1920s to his mature style in the 1940s, and on through to the ’60s, in a way that sheds light on the painter’s growth.

The essays in Stuart Davis: In Full Swing are written with knowledgeable historical perspective and insight by Barbara Haskell, curator at the Whitney Museum of American Art, and Harry Cooper of the National Gallery in Washington.

The book also includes a revealing, year-by-year, and often month-by-month chronicle of Davis’ life from the year of his birth, 1892, to the year of his death in 1964. It details all of the professional and personal, triumphs and sufferings, of his life. Lovers of Stuart Davis’ art will find the chronicle and essays fascinating.

It is clear that no expense has been spared to produce this handsome large-format 10 x 12.5 inch volume that includes approximately 100 outstanding color reproductions, printed on a wonderful grade of paper with excellent binding.