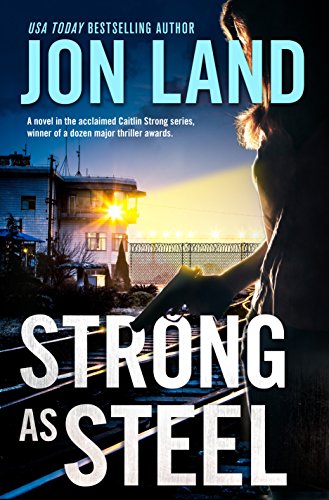 “Strong as Steel is an over-written splatterfest that may be fine for the shoot-’em-up crowd . . . but he offers nothing of interest here to any reader who may be looking for something set in the Lone Star State that’s a little more realistic and three-dimensional, with characters that are believable, and a story that doesn’t stick in your throat like a lumpy, inedible stew.”

Texas Ranger Caitlin Strong is participating in the service of a warrant at a private intelligence company in Dallas when all hell breaks loose and bullets start to fly. When the shooting’s all done, assailants and civilians alike are dead, and Caitlin doesn’t know why.

The trail leads her directly to a case worked in 1994 by her father, Ranger Jim Strong. It involved Mexican drug queen Luna Diaz Delgado, Caitlin’s captain D. W. Teppler, and stone boxes known as ossuaries. Bodies are turning up once again as they did in 1994, and Caitlin won’t stop until she has uncovered the shocking secret behind the mysterious bones that seem to kill everyone who comes in contact with them.

Strong as Steel is Jon Land’s tenth installment in his Caitlin Strong series. Land is a USA Today bestselling author of more than 40 books, and several of his Strong novels have won awards, albeit the kind you pay a fee to contend for. The title of each novel in the series includes the protagonist’s name, e.g. Strong Vengeance, Strong Rain Falling, Strong Enough to Die.

In this one, the author tells his story by following two timelines: one featuring Caitlin in the present and the other covering her father’s investigation in 1994. This approach allows Land to show us the backstory behind Caitlin’s current mystery rather than just tell us about it, and it keeps the strong action flowing, so to speak, from chapter to chapter.

The problem with the plot, though, is that while Land waggles between the two timelines, drawing out the suspense, it takes forever to get to the point of the whole thing—the ossuaries and the bones they supposedly hold. Well over two thirds of the novel passes, in fact, before the magical words are uttered that are supposed to captivate and astonish us.

Land has tried to splice his usual Texas-style gunfest with an action/adventure story in imitation of Dan Brown, Clive Cussler, or Douglas Preston, but the fact of the matter is that he doesn’t have the writing chops to pull it off. The story is lumpy and uneven. He tosses stuff into the mix like cups of lard, hoping it all will render down into something palatable, but it never really does.

His characters are flat and not believable. Caitlin could be a Colin or Calvin or Charlie and you wouldn’t notice the difference. She’s tough, she loves guns, and she’s a Ranger, dammit, but other than that there’s nothing here to attract a reader looking for an interesting female character. The other recurring characters, including Teppler, Guillermo Paz, Cort Wesley Masters, and his extremely annoying son Dylan, are no better.

On top of that, the dialogue is hopeless. These folks only seem to be able to speak one of two languages, Hardass or Smartass, and after a while you long for just a tiny little stretch of dialogue that isn’t trying to impress the hell out of you.

The bottom line is that Land writes these novels for a specific audience. They know who they are. They love the shootouts, they love the tough swagger, and they really dig the blood, bone splinters, and flying brain matter. The scene early in the novel, for example, where the Really Bad Guy buries a bunch of people up to their necks in the ground and then beheads them using a farm cultivator is written just for them.

Equally unpalatable, and impossible not to mention, are the scenes in which adults on both sides of the good-and-bad ledger coach children at length in the merits of a violent lifestyle in which one must kill or be killed, literally. Land’s moral universe is as flat and dry as a Texan desert, and it’s not one that will appeal to many readers outside his base.

Strong as Steel is an over-written splatterfest that may be fine for the shoot-’em-up crowd that buys Land’s stuff each time out, but he offers nothing of interest here to any reader who may be looking for something set in the Lone Star State that’s a little more realistic and three-dimensional, with characters that are believable, and a story that doesn’t stick in your throat like a lumpy, inedible stew.