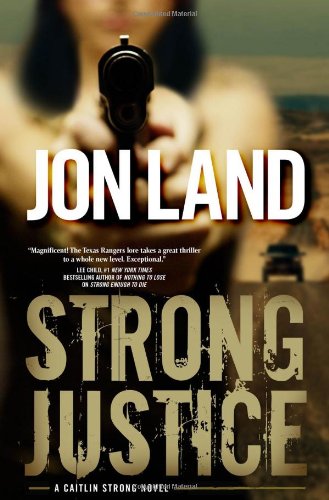 Caitlin Strong, fifth generation Texas Ranger, first introduced to us in Strong Enough to Die, is back on the trail, this time in pursuit of a serial killer. His name is Macerio, and he is suspected in the Las Mujeres de Juarez atrocities, where over four hundred dismembered and mutilated women were found along the Texas/Mexico border. According to locals, Macerio may also just be the devil personified, with evil powers preventing him from being killed.

As if this wasn’t enough trouble for Strong to deal with, she’s also called out to the small town of Albion, where a man is holding hostages inside a convenience store. The man has killed some of the people already, and no one is sure how many—if any—hostages are still alive.

Strong enters the store through the back, and sees the man with a gun held to the head of a young girl. Not able to get a clear kill without harming the girl, Strong decides to talk to the man, who claims that he had to murder the other people in the store—and his own family, earlier—because they had spiders living and breeding inside them. He had to stop the spiders from spreading and doing the same thing to others. Intuition suddenly kicks in, telling Strong that this bizarre incident is just the tip of an iceberg associated with all the violence that is occurring in the town. More terrifyingly, something beneath the surface has the potential to give America’s enemies a new weapon to terrorize the country.

And just when you’ve had a chance to catch what little of your breath is left, into this already explosive mix comes Colonel Renaldo Montoya, the commander of Mexico’s renegade Zeta Special Forces, plotting a guerrilla war against the U.S. that he believes will launch the 2012 End Times foreseen by the Mayans.

Strong eventually teams up with no-nonsense tough guy, Cort Wesley Masters, whose wife was murdered in Strong Enough to Die. Strong has had a romantic relationship with Masters, complicating matters further.

One the many strengths of the book, though, is the conflicting relationship of the two opposite coins: Strong and Masters. The fact that Masters has a criminal past, and Strong has a pure Texas Ranger upbringing only adds fodder for fascinating reading.

In unsure hands, this relationship would look a clumsy caricature. Instead, it is handled skillfully, making us yearn to believe in its possibility. There’s also great tension created by this complication, making Masters and Strong question if they can genuinely re-ignite their relationship, or if violence and guns are the only things that they have in common.

There is a cinematic beauty to Land’s atmospheric writing, placing you right in the middle of all the action. You can smell the flavors of Texas and Mexico, and feel the heat scorching the back of your neck. There is also the acrid reek of gunpowder mingling with the coppery stench of blood and death. Land is to be commended for keeping the plight of the women of Las Mujeres de Juarez in our minds, strengthening our belief that justice will one day prevail for them.

Caitlin Strong is the most compelling, formidable hero/heroine to grace the pages of any novel in years. Born with the unconquerable combination of the three Bs: Beauty, Brains, and Balls, she is not afraid—when the need occurs—to shoot first and ask questions later.

Each tense and vivid scene in Strong Justice is succinctly rendered with such powerful prose the reader is left gasping for southern, dusty air. From the very first kick-in-the-teeth, right down to the last bloody bullet fired, the Caitlin Strong series is quickly becoming totally addictive.