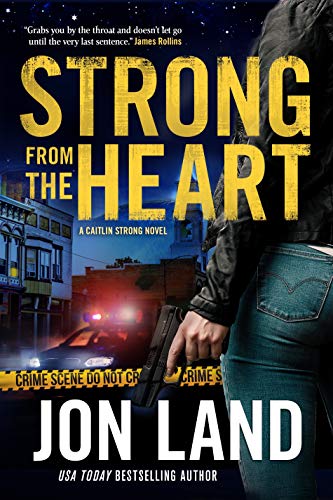 “Don't make any plans for tomorrow, people. You're not going anywhere until you finish this book. And you'll need time to catch your breath, too.”

Is there a stronger word for unputdownable? Some word or phrase that signifies something more magnetic and engrossing, more compelling and consuming than that overused neologism? If there were, it would most certainly be used to describe Strong from the Heart, Jon Land's 11th book in his Caitlin Strong Series.

But all right, let's go with consumed.

Readers will be wholly and completely consumed from first page to last by this complex, multi-layered story peopled with characters each of whom has a backstory that could easily drive a riveting novel of its own.

Picture this: Camino Pass, a small desert town in Texas, population under 300 souls.

A mailman, hatless, sunburned, dazed, unaware of his surroundings and staring blankly at who knows what is found wandering the street. His mailbag slung over his shoulder spews a fluttering trail of letters and junk mail in a three-mile wake behind him. He was spotted by a Homeland Security drone scanning the Texas-Mexico border, so the dispatcher sends out a patrol car to check him out. When Homeland Security agents arrive, they are stunned to discover that everyone in town is . . . dead!

What happened? Was it the food? The water? The air? Did some wayward germ or microbe wipe everyone out?

Or, God forbid, is this a biowarfare incident silently spreading to the rest of the country or maybe the world?

Camino Pass is soon flooded with investigative scientists, biologists, SWAT teams, Texas Rangers, national guardsmen, military units, even the highway patrol. A swarm of local and federal law enforcement agents from DHS in HazMat suits scurry around using the latest high-grade technology in an effort to determine what happened.

Caitlin Strong, a Texas Ranger from a long, long line of Texas Rangers, arrives to assist with the investigation. Readers of previous books in the Caitlin Strong series will be familiar with her lineage. Most of the other characters in the book are familiar with Caitlin, too, and she evokes a wide range of diverse reactions. She is loved and respected by some for her courage and dedication to law enforcement but feared and resented by others who think she's a trigger-happy broad. She's subjected to quite a bit of misogyny from her male cohorts, as well, but takes it all with aplomb.

Caitlin joins in searching the houses. Bodies are everywhere, dropped where they sat or stood in the midst of whatever they were doing when whatever it was happened. Tables are set for meals, toys strewn in front yards, radios play, overheated TVs hum. The local sheriff is crumbled on the ground near his patrol car, eyes frozen open, mouth agape, his weapon still holstered. A video game frozen on a television screen, a dead teenager still clutching the controller.

They find no one, but Caitlin gets that nagging sensation that she's being watched.

Caitlin's lover, former mob enforcer Cort Wesley Masters, is summoned to the hospital emergency room where his son Luke has nearly died from an opioid overdose. Caitlin and Cort Wesley track down the dealers who sold him the drugs and discover that important people connected to the government and to pharmaceutical companies are deeply embedded in the opioid crisis sweeping the country.

Interspersed throughout the narrative are compelling flashbacks to Caitlin's Ranger grandfather and his law enforcement activities in Camino Pass.

Even though the thriller hero in Strong from the Heart is a female, this is a macho book. Author Land includes detailed descriptions of the investigators—their uniforms, tactical garb and gear, vehicles, weapons, and defensive techniques and practices. Air guns that can blow out the latch assemblies of locked doors. High tech respirators with supplies of oxygen block out the lingering odors of human waste or the last cooked meal in a death house. Equipment that instantly analyzes air composition and identifies contaminants or toxins.

Though Caitlin is a tough cookie, she comes across as an interfering do-gooder when she takes time out from reporting on the status of the investigation to scold and pressure a cigarette smoker about quitting.

Setting that aside, anyone obsessed with military technology, international relations, national security, corporate or government wrongdoing will especially enjoy the vibe of this dense, tension filled story full of geopolitical intrigue.

There are a lot of characters, some merely walk-ons, and readers new to the series may be well served by making a list of all the characters along with their job descriptions.

In the Author's Note, Jon Land discusses his inspiration for this book.

"I knew I wanted this book to follow the lines more of a traditional high-stakes, high-action thriller. More Steve Berry and James Rollins. A big story featuring a big McGuffin . . . Well, when in doubt, turn to the headlines, right? I wanted to base a story on something current, something people were talking about and fretting over. A genuine crisis.

"Yup, that was where Strong from the Heart started, with this magical question:

"Then I was off and running."

According to the Centers for Disease Control and Prevention, there were 50,042 deaths involving opioids in the United States in 2019 alone. Roughly 21 to 29 percent of patients prescribed opioids for chronic pain misuse them. Between eight and twelve percent develop an opioid use disorder. An estimated four to six percent who misuse prescription opioids transition to heroin. About 80 percent of people who use heroin first misused prescription opioids.

Don't make any plans for tomorrow, people. You're not going anywhere until finish this book. And you'll need time to catch your breath, too.