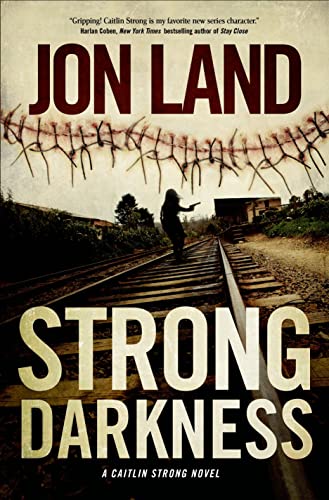 “Strong Darkness is a gritty, fast-paced, and unpredictable tale that will both enlighten and enthrall its readers.”

In a genre dominated by testosterone-fueled stories of former Delta operators, Navy SEALs, and hard-boiled alcoholic detectives, a female protagonist is hard to sell and even harder to write, but Jon Land nails it with Caitlin Strong.

The fifth-generation Texas Ranger returns in a story that is as much a wild west adventure in Caitlin’s present-day scenes as it is when following her great grandfather’s hunt for a serial killer on the Trans-Pecos rail line in 1883. In fact, Jon Land offers his readers a wink and a nod to this effect by setting one of Caitlin’s gun battles on an historic steam train on the very same line, complete with visions of the Ranger running across the tops of the rail cars.

The story opens as Caitlin’s ancestor, Texas Ranger William Ray Strong, investigates a vicious serial killer with the distinctive habit of decapitating prostitutes from the Chinese rail camps and then sewing their heads on backward. Then, more than a century later, Caitlin is faced with a copycat attacking Asian women along the route of the old line. The bahk guai, or “white devil,” rises again.

At the same time Dylan, the son of Caitlin’s sometime lover and former outlaw Cort Westley is attacked near Brown University in Providence, Rhode Island, while meeting with a Chinese girl. Caitlin soon concludes that Dylan’s attackers and the serial killer are linked, and begins to unravel a dark, high-tech conspiracy that could kill eighty percent of Americans.

Page after page of action leads to a heart-pounding final confrontation, part of which takes place in a lab filled with all things poisonous from the animal and plant worlds. The ensuing chaos is the stuff of nightmares, and the ending is both surprising and satisfying.

In addition to entertaining the reader, Jon Land uses this story to highlight real-world threats and horrors. In particular, Strong Darkness takes on the human trafficking and underage sex trades in China and the United States.

He tackles a difficult and uncomfortable topic head on, making its abhorrent nature clear without resorting to gratuitous description. He also uses Strong Darkness to raise the reader’s awareness of real world Chinese infiltration into American communication networks, as well as drawing attention to a very real and very dark corner of the Internet called the Deep Web.

Strong Darkness has something for everyone. There are fusillades of bullets, fistfights, and explosions for the thriller lover, and hidden parallels in the subtext of the historic and present-day stories for the literary thinker. There are even touches of magical realism and an introspective former assassin for the philosopher. Longtime Caitlin Strong followers will love the continuation of her story, but Jon Land weaves enough character backstory into his narrative and dialogue that readers new to the series will not be lost at all.

In the final analysis, Strong Darkness is a gritty, fast-paced, and unpredictable tale that will both enlighten and enthrall its readers.