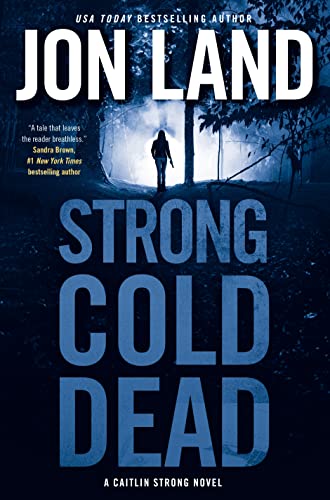 The fairest and deadliest of the Texas Rangers returns alongside her usual rough-riding entourage in a new thriller that upholds the Jon Land’s high bar for action and storytelling.

Strong Cold Dead is the eighth installment in the series starring Caitlin Strong, who remains one of the strongest female characters ever to hit the page. The elder son of Caitlin’s friend and lover Cort Wesley Masters becomes embroiled in a clash between a mega-corp looking to exploit the protected lands of a reservation and Comanche protesters trying to save their ancestral home.

Caitlin is sucked into the fray, only to discover that a deeper and much more sinister threat lies at the heart of the battle. Good and evil intertwine in a story that reaches back to the mid 19th century, when Caitlin’s great-great grandfather Steeldust Jack Strong stood between the same Comanche tribe and John D. Rockefeller. The parallels between past and present run deep through both character and plot, until a new and terrifyingly real player steps on stage to bring the story to an explosive, high-octane finale.

Page by page, Jon Land reveals a deep insight into the human psyche and paints it onto the canvas amid the explosions and gunfire using the subtler actions of his characters. Caitlin is faced with the blowback of past arrogance and must come to grips with the deadly, unintended consequences of doing what she thinks is right.

At the same time, Cort Wesley’s son Dylan confronts another face of the same demon, hoping that an epiphany has not come too late to turn aside his own destruction. The villains are just as well drawn. Like Caitlin and Dylan, businessman Cray Rawls and young genius Daniel Cross each have a past that defines their present. This creates empathy, if not sympathy from the reader. The characters, both heroes and villains, are more real than ink on a page should allow.

Jon Land’s characters are not the only axis from which Strong Cold Dead draws its depth. He gives them an innovative and intricate plot to play in, weaving a tale that reaches beyond the usual thriller tropes to unveil a completely new weapon, meticulously researched, that is both surprising and credible at the same time. Along the way to the big reveal, the various story threads blur past with present, weapon with villain, and hero with hero. Readers will love peeling back the layers of the tapestry until Caitlin finally uncovers a material catalyst that turns immortality into death, and a terrifying human catalyst bent on turning a small land dispute into an epic attack.

Jon Land is the king of the intelligent thriller, continually pushing his own writing to new levels. Strong Cold Dead is no exception, with insightful characters, an innovative threat, and a multi-dimensional mystery that is a real pleasure to solve. This is another one for the discerning thriller-lover’s top shelf.