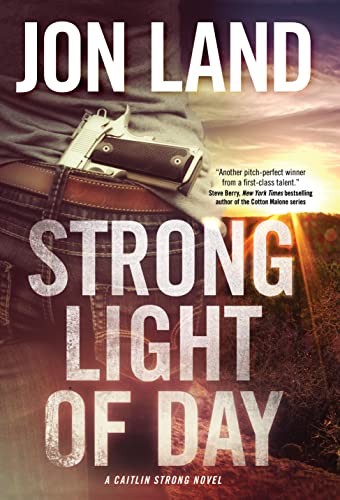 “combines the insight and subtlety of the great literary masters with the vivid imagery and heart-pounding action of a big-screen blockbuster.”

A Texas Ranger of the fairer sex, a hired gun raising two boys alone, a Venezuelan assassin seeking to understand the eternal nature of man: Jon Land brings them together again in a new thriller that outshines all the rest.

Strong Light of Day is the seventh offering in the series named for its tough and beautiful protagonist, Caitlin Strong. The Texas Ranger returns to the page to search out the connection between a herd of cattle found stripped to the bone and a group of kids that vanished without a trace halfway through a prep school field trip. The evidence leads Caitlin and her ex-special forces boyfriend Cort Wesley Masters into an intricate maze where Russian mobsters and a controversial billionaire trying to solve world hunger intersect with a classified, 30-year-old investigation that brought the Cold War to the streets of Texas. All the while, somewhere just beneath the surface, a relentless, remorseless army marches toward an apocalyptic end to the American heartland. The suspense rises page by page until all the pieces crash together in an epic, high-tech finale.

With a string of bestsellers behind him and a set of colorful, well-established characters to play with, Jon Land might easily rest on his laurels and pump out a cookie-cutter thriller. Strong Light of Day proves once again that he refuses to do so, choosing to push the literary envelope instead. He is not afraid to drop bombshells on both his characters and his readers, digging into the psyche of his heroes and villains while keeping readers on a rollercoaster of suspense and high-body-count action.

Using his characteristic insight into human behavior, Land often lures his readers into sympathy with his villains. They are not merely evil. They are broken. Billionaire Calum Dane is his best creation yet—impulsive and visionary, brilliant and deeply troubled, seeking to save the world with one hand while punishing the very soil that stole his childhood with the other. His rage and his inability to let anything stand in his way drive him to gruesome abuses and terrible risks that breed one horrifying, unexpected consequence—one that a Russian possessed of his own sadistic demons will use to cataclysmic advantage.

Strong Light of Day does not confine the darkness to the villains. Like faces in a shattered mirror, Land’s trio of heroes reflect Dane’s flaws. Caitlin’s impulsiveness and her inability to even pause when faced with rules and barriers drive her toward an inevitable clash with a sitting congressman. Guillermo Paz confronts his own troubled childhood and comes to grips with the brutality it planted within him. Cort Wesley, a man prone to extreme violence, faces the same battle with fatherly love that Dane has already lost. These strands, both the heroes’ and the villains’, are woven seamlessly into the greater story, so that readers may not even see them on the first pass. They will likely be too busy turning the pages to keep up with the action.

The climax of Strong Light of Day incorporates the author’s meticulous research into multiple fronts of cutting edge technology. Land presents his readers with a high-concept threat that is so terrifyingly possible that it might keep them up at night long after they turn the final page. And he finishes it all with a battle scene that is unlike any finale ever devised for fiction. It is inspired. To say any more about it would spoil the fun.

There is no doubt that Jon Land has raised the bar of his own writing once again. Strong Light of Day is an intelligent thriller that combines the insight and subtlety of the great literary masters with the vivid imagery and heart-pounding action of a big-screen blockbuster. This is one for the shelves of English professors and thriller lovers alike.