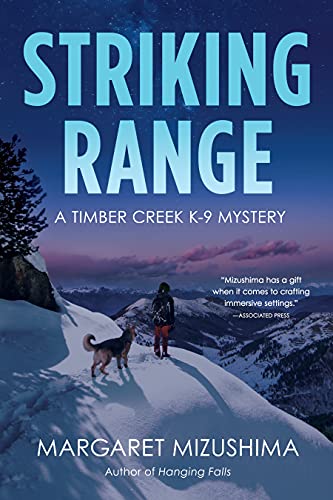 “The way Mattie handles her service dog, the logistics of his training, his canine personality, the important evidence he believably uncovers, and their warm yet disciplined interaction remain the heart of the stories and give them their authenticity and appeal.”

In comparison to many wilderness-based crime series, which can be brutal (and usually feature a male protagonist), this one is gentle. It veers toward a cozy mystery in that violence occurs mainly off-stage and the story focuses on relationships, as well as secondary characters’ personalities and quirks, for an overall feel-good quality in a small town. This doesn’t downplay Mattie being an accomplished outdoorswoman who battles the elements—as well as killers—in all of her adventures.

The central plot of Striking Range revolves around multiple murders and a childnapping, which Mattie must help investigate. These tie into the series subplot of Mattie discovering her family backstory.

The first murder victim is the primary suspect in her father’s killing decades ago. The suspect happens also to be the man who tried to kill Mattie in a previous volume. He gets knocked off in his prison cell shortly before Mattie and a new detective covering the case arrive to interview him.

The only clues he leaves behind are a map marked with locations in the high country including where he had held Mattie before trying to kill her. She and her team venture back into that terrain, which has since been burned to a crisp by wildfires, to explore those spots, hoping for clues but worried about finding more bodies. Which, ultimately, they do.

One of them is a young mother whose just-born baby has disappeared. This confuses the case until it becomes clear that both murders are related. The need to find the infant adds urgency to the story. Meanwhile, Mattie’s boyfriend Cole, the town veterinarian, is drawn in because he’s part of the volunteer rescue and deputy team. Everyone involved gets caught at altitude in the mountains when severe weather rolls in. Eventually the key players are trapped up there with the killer.

These pieces and parts mix into an engaging investigation-adventure. At the same time, it’s a bit flat compared to other volumes in the series. Perhaps this reflects author fatigue, in that it’s hard to crank out a book a year when you’ve got loyal readers waiting and you don’t have quite enough time to meld inspiration and polishing into production schedules. That is pure speculation, but the novel does give off a whiff of trying too hard.

The plot feels more mapped out than character generated. The evolution of Mattie’s backstory feels like a pin on the map, as in, by this point in the series X-much information must be revealed; and her relationship with Cole must attain a certain level before the story closes. Previous volumes gave a stronger sense of integration and intensity, allowing readers to ignore author existence and be immersed in the story. With this book it’s easier to walk away for a break, versus it being a compelling page turner.

But as with all volumes in the series, the best parts are when Mattie works with Robo. The way Mattie handles her service dog, the logistics of his training, his canine personality, the important evidence he believably uncovers, and their warm yet disciplined interaction remain the heart of the stories and give them their authenticity and appeal.

Mattie is a hard main character to fall in love with, but she is well developed steadily through the series, and in this volume starts to come into her own because she has learned enough about her history to understand herself. She is transforming from an insecure, overcontrolled creature driven by her past to a mature woman and professional police officer moving toward directing her future—and is left at the end with a major life change pending. The suspense of it leaves readers eager to know more after the plot for this volume is resolved.

Just because Striking Range isn’t as strong as its predecessors doesn’t mean the next book won’t have fresh vigor. While readers starting the series with this volume may hesitate to move onward, loyal followers will be eagerly awaiting the next installment.