Strike Me Down: A Novel 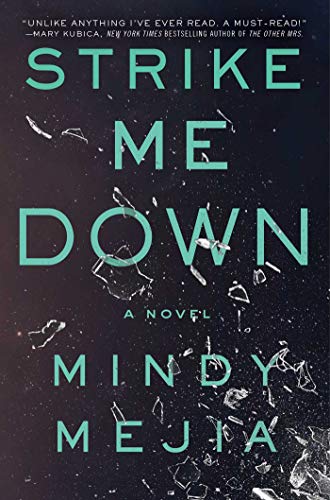 “Mindy Mejia brings it big time with this compelling kick boxing themed mystery. It's a knockout!”

Take a large dose of intrigue, double dealing, and deception in equal measure, add complex characters in complicated relationships, and you have Mindy Mejia's thoroughly enjoyable corporate suspense, Strike Me Down. Readers are privy to compelling, behind the scenes look at the world of big time kick boxing—the fighters, the fights, the fans, the pain and reward of hard core training, and a high end training facility called Strike.

Underneath it all is festering anger and resentment along with $20 million of tournament prize money gone missing.

Nora Trier, a nationally known forensic accountant, is hired to find the money and the thief by Gregg Abbott, husband and co-owner of the facility along with its champion and fan favorite, Logan Russo.

He brags to the investigators that Strike is the number one premier urban gym in the United States that teaches self-defense, martial arts, and body conditioning with locations in 29 major cities:

". . . the fastest growing, premium athletic brand in the country . . . we developed a line of nutritional supplements and hit the market at the exact moment protein powders were exploding. From there we expanded into sponsorships, apparel, and urban gym experiences. . . . we've trained dozens of youth state boxing and professional UFC champions . . ."

But all is not well at the top.

It seems Logan had become infatuated with a young Strike trainer from Somalia who ended up dead in the locker room. The death was ruled suicide. Case closed. As far as Logan is concerned, it must never be spoken of again. But she thinks about him and their practice fight on her 50th birthday:

"Aaden . . . was a blur of tendons, a tornado of roundhouses, and when he threw a cross-hook-uppercut combo this boss-gone-bottoms-up took a cartoon flop straight to the mat. While I was lying there, doubled over laughing in pain and spitting blood at the hands offering to help me up, I knew exactly how I wanted to celebrate my birthday."

Nora and Gregg, too, have something they don't talk about, something she fears could blow up the investigation, or worse, put the wrong person behind bars.

Gregg drops a bombshell right at the start when he tells the forensic team that he suspects Logan stole the money. Later, when evidence points to other suspects, Aaden included, Logan threatens to destroy anyone who claims it was him. Dozens of unanswered questions lead to a tangle of even more questions, but Nora, a kick boxer in training herself, is not one to give up easily.

Author Mejia is a CPA and sprinkles in plenty of accounting trickery and fraud detection techniques. She explains what prompts someone to commit fraud. Personal pressure is a key ingredient. A gambling problem, medical bills, other ballooning debt.

". . . People under stress, people who are being pushed to make choices they otherwise might not make. Pressure is one of the key ingredients of fraud and when we find the people who are under pressure, we know where to look to uncover the crime."

The payoff for kick boxing fans, bodybuilders, and fitness fanatics are the author's descriptions of the bouts and the artistry of a body at the very peak of physical fitness:

". . . she landed a side kick to the challenger's face that broke her nose, sprayed blood all over the mats . . . I was mesmerized by the flex of Logan's calf, the ripple of perfectly arced quads at the moment of impact, glistening with moisture and salt and indomitable victory."

"Her shoulder gleamed in the cloud of the stream like they'd been sculpted from marble and heat."

". . .  her body rounded in places where usually on angles lived—a slope in her shoulder, a curve in her belly . . ."

". . . Logan stood in the doorway to the terrace, arms crossed and barefoot. Years of relentless training, even after she'd retired from the sport, had sculpted her beauty into more exquisite detail. The lines of her body were chiseled, unforgiving.  A perfect column of sweat darkened her wife beater from chest to groin."

Mindy Mejia brings it big time with this compelling kick boxing themed mystery. It's a knockout!