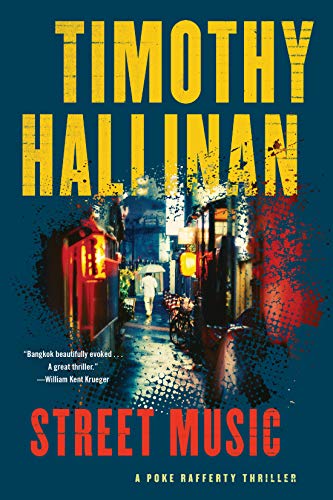 “Despite the classic investigations that Poke leaps into, with violence and threat and red herrings and regret, Poke Rafferty is a person who cares enough to listen, to experience, and to change, even in this final volume of the series.”

One of the best loved international crime fiction series ends this season, as Tim Hallinan’s Street Music is the ninth and final book on his Poke Rafferty Thrillers. Catching attention in the fourth book with an Edgar nomination for The Queen of Patpong, Rafferty’s Thailand novels have won wide acclaim.

For readers already following the series, Street Music represents a bittersweet farewell to the “little family” that Hallinan has nurtured. First there’s been Poke Rafferty himself, an American writer who settled in Bangkok, won over by its people and sense of community. Poke’s marriage to Rose, a “bar girl” and former “Queen” of the Patpong bars, created the frame for their eventual adoption of a much-battered but creative, caring, and eventually loving daughter, Miaow, a child of the streets.

Street Music opens with the presence of a new member of the family, a baby that’s already been highly controversial earlier in the series. It’s a boy! But Poke’s not finding “natural” fathering impulses; Rose’s ever-present set of women friends crowding him out of the bedroom and onto a lumpy couch has a lot to do with this. But so does the kind of parenting he’s already been doing, growing into protecting and nurturing Miaow. Her street roots have engaged her in peril multiple times, and Poke routinely mobilizes friends, especially one in the Bangkok police force, to help.

What peril approaches Poke especially for Miaow when a mysterious street woman begins to follow him and asks him for a huge amount of cash as “protection money” to keep her from destroying the little family? How can Poke handle the resulting chaos without upsetting Rose and bringing risk to the baby as well? It’s rough when you find yourself lying to the people you love best in order to take care of them.

An Afterword by Hallinan recaps his approach to the series, and the startling effect that setting up a first scene that involved Poke + wife + daughter + groceries = family. “The word family did the trick,” he explains. “I barely knew who these people were but the moment I realized they were a family, I thought that it might be interesting to drop a normal—if intercultural and self-assembled—family, who are trying to preserve relationships along traditional lines, into the world capital of instant gratification”—that is, into Bangkok.

Not only is Poke Rafferty being followed and blackmailed in Street Music—he’s also coming to terms with his understanding of poverty, which doesn’t always lead to crime (although he’s about to find evidence of possible murder). Another former bar girl, Toots, lays it out for him: “Some lady no good. I poor girl too, Poke. Then I lucky too much, marry Leon, but before, when I have no money, I not take. Not good for karma. You know, you are poor and you good, you win. You and poor and you bad, poor win.”

This is exactly the kind of moment that makes Hallinan’s crime fiction, especially the Poke Rafferty series, so interesting and unusual: Despite the classic investigations that Poke leaps into, with violence and threat and red herrings and regret, Poke Rafferty is a person who cares enough to listen, to experience, and to change, even in this final volume of the series.

What does Poke learn about Miaow’s original parent(s) after all this time raising her? How will he come to grips with being the father of a baby boy and the husband of a woman who’s just experienced her own major transition? Which friends will lead him into more danger to his family, and which will help him walk through it and survive?

Street Music is very readable without the earlier books in the series. But it’s a richer read when placed in their context. Read the others before it or after; chances are, once you’ve entered Poke Rafferty’s community, you, too, will experience some of his reasons to change.