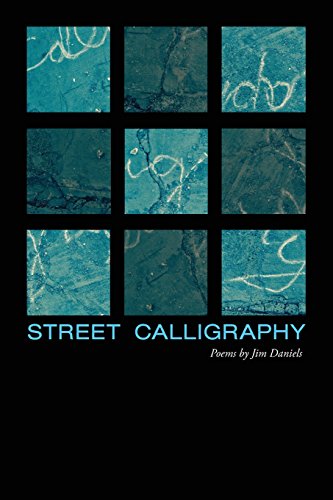 “Each poem is an invitation to join the songs still playing in his head where reflection, nostalgia, and love are bound.”

Jim Daniels is the author of 17 books of poetry, as well as several volumes of short stories, plays, and film scripts. As the Thomas Stockham Baker University Professor of English at Carnegie Mellon University, he has taught for 35 years. With echoes of the work of fellow Detroit poet Philip Levine, Daniels is yet an original. Though he has aged wisely, his work remains forever young and inventive and vital as in this new Street Calligraphy.

I have rarely enjoyed a book of poems more. Perhaps because of a shared working-class background celebrated so realistically. In poem after poem Daniels captures the tone of the cultural era with language and imagery so aptly, as in “First Communion” where he receives a Catholic missal and

from Sister Maureen marks my place:

I hope you stay as close to Jesus

as you are today.

[Next, we leap ahead to his high school years]

I cut out the heart to hide my stash:

a chunk of hash. Lots of prayers,

I noticed, cutting them out, praying

not to get busted. I hid the book

under my dented Electric Football.

The irony hits the reader and that “dented Electric Football” game is the perfect image for such teenage subterfuge. The language is kept simple yet alive with its rightness even as his father confronts him.

In “Up on Blocks” he lands us on the nearly abandoned streets of his Detroit. In “The Rusty Muffler Nostalgia” he celebrated the wildness of that youth:

I’ll swear on a case of PBR longnecks

that it was. Life promised few great adventures

after Power Mechanics and Auto Shop,

after parking-lot brawls and drunk-

What marvelous turns of phrase: “adventures after Power Mechanics,” “parking-lot brawls,” “drunk-driving lessons.” His inventiveness with language is a delight and a rare achievement. Daniels is a master of capturing the spirit of the times with its small tragedies and its innate humor.

In a later section the poet pays tribute to the two phases of his life, the growing up in Detroit and the living as father now in Pittsburgh. “House of Drumming, House of Song” juxtaposes his youth:

In Detroit, we never sang.

Not the boys, not the girls.

We listened to rock so loud our ears

smoked, but we were not singers.

[And now in Pittsburgh, he hears the singing of his children.]

Here in Pittsburgh, my teenage son and daughter

in the yard, I hear their voices

rise and fall through open windows.

They can carry a tune. They have pockets

with magic tread and endless dreaming.

Daniels is able to capture both the vigor of youth recalled and the sweet sadness of watching his parents, himself, and his town age. Each poem is an invitation to join the songs still playing in his head where reflection, nostalgia, and love are bound.