The Strategy of Victory: How General George Washington Won the American Revolution 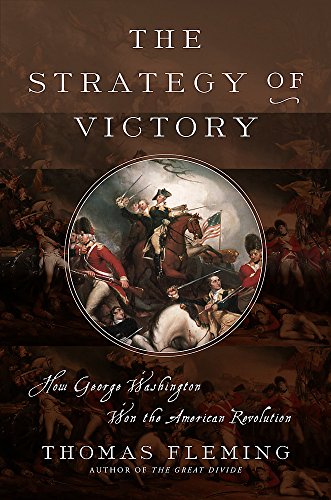 Biographer James Thomas Flexner has called George Washington the “indispensable man” of the American Revolution. Historian Thomas Fleming agrees, and explains in his latest book, The Strategy of Victory, how Washington won the War of Independence against Great Britain, preserved the fledgling republic, and forged the United States Army.

That victory, to borrow the Duke of Wellington’s description of the Battle of Waterloo, was “the nearest run thing,” and had Washington not brilliantly adjusted his tactics and strategy to the war’s peculiar circumstances it is likely that the new nation declared on July 4, 1776, would have been short-lived.

Fleming to his credit approaches strategy not from the abstract, theoretical perspective of some international relations scholars, but instead from the perspective of an historian analyzing facts and circumstances at specific times in specific places.

He notes that at the war’s outset Washington urged Congress to authorize and fund a Continental Army of 60,000 soldiers. The United States, after all, was fighting the world’s most powerful empire. Congress, not for the last time, gravely underfunded the army. At certain times throughout the war, Washington was lucky to be able to field a several-thousand man army in any one battle.

And it was an army that Congress often failed to pay. This breach of faith by Congress almost led to a mutiny that could have ended the republic on the eve of victory.

Washington’s “strategy of victory” involved fighting a protracted war. He and his top commanders in the field—Daniel Morgan, Nathanael Greene, Anthony Wayne, Benjamin Lincoln, and, for a time, Benedict Arnold—sacrificed forts and posts when necessary to preserve the army.

The Continental armies became expert at retreating in order to fight another day. Fleming points out, moreover, that even when the armies won victories (e.g, Trenton, Princeton, Monmouth, Saratoga) Washington and his commanders refused to risk the army by attempting to defeat the British in one decisive battle.

The army, Washington once explained in a letter, should “on all occasions avoid a general action, or put anything to the risqué, unless compelled by necessity into which we ought never to be drawn.” [T]he fate of America was at stake,” he wrote.

“Fight, get beat, rise and fight again”—that was the essence of Washington’s strategy as explained by General Greene. It was not popular with Congress, some of whose members seriously considered replacing Washington with General Horatio Gates, the victor of Saratoga. But in the end it worked.

Fleming also describes Washington’s skillful use of militia and the French navy, two other important elements in his strategy of victory.

The author also highlights some little remembered battles, such as Springfield and Connecticut Farms in New Jersey in June 1780, the last major clashes between the Americans and British in the north before the main action shifted to the south in the Carolinas and Virginia.

The book’s most vivid description of the fighting is saved for the final battles of the war in the south—the Cowpens, Guilford Court House, and Yorktown, where Generals Morgan, Greene, and Washington and their armies, with help from the French navy, finished off the British.

The defeat of the British, however, did not ensure the survival of the American republic. Toward the end of the war, at the army’s encampment at New Windsor, near Newburgh, New York, Washington prevented a mutiny by his junior officers who were justifiably angry at Congress for failing to pay the army’s soldiers.

On March 15, 1783, at a hall in the encampment known as the Temple of Virtue, Washington interrupted a meeting of the conspirators to read them a letter from a Virginia congressman promising to satisfy some of the officers demands.

As he reached for his eyeglasses to read the letter, Washington remarked, “Gentlemen, you will permit me to put on my spectacles, for I have not only grown gray but almost blind in the service of my country.” “A murmur of emotion swept the room,” writes Fleming. “Some men began brushing away tears; a few wept openly.”

This simple gesture, Fleming writes, “ended . . . the most perilous moment to that point in the brief history of the fledging United States of America.” This revolution would not go the way of the French Revolution, and subsequent revolutions in the 20th century that ended in dictatorships.

After the war, in 1794, during Washington’s second term as president, two internal enemies—Indians and citizen tax protestors—were forcibly subdued at Fallen Timbers in Ohio and in western Pennsylvania (the Whiskey Rebellion), respectively.

Fleming believes that it was the combined scares of Fallen Timbers, the Whiskey Rebellion, and the outbreak of global war between Great Britain and France that finally persuaded Congress to establish the permanent army that Washington had been recommending for nearly two decades, signaling the “difficult, troubled birth of the US Army.”

Washington, indeed, was the indispensable man.