A Straight Road with 99 Curves: Coming of Age on the Path of Zen 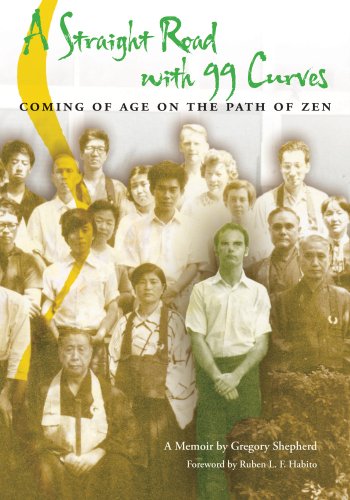 “A Straight Road with 99 Curves: Coming of Age on the Path of Zen, a Memoir by Gregory Shepherd is a koan about youth in search of a profound life philosophy.”

“Go straight along a road with 99 curves” is a Zen koan or transformational case young Gregory Shepherd is given by his roshi (teacher). This koan evolves a dynamic paradox using the intellect to perceive a state of Zen inclusive of yet beyond intellect.

The 99 curves koan was given to Gregory 30 years ago. Today he stands in front of his old zendo (Zen center) Three Clouds Zendo in Japan, staring through the gate, questioning his own unworthiness and promises of the past compared to his current reality.

Mr. Shepherd wonders if it is again time to cross the zendo threshold.

A koan lasts one hour or a lifetime. Traveling straight along a road with 99 curves is building a great wall. Here and now the wall is straight. Trail the wall into its future, and it is curved like the earth it is buried in. What the earth supports is inseparable from its earthly condition. Building the wall with an acceptance of earthly curves shows worthiness and imparts strength to the wall: a promise of perfection.

A Straight Road with 99 Curves: Coming of Age on the Path of Zen, a Memoir by Gregory Shepherd is a living koan written on the wall for over 30 years. A koan carries immediacy, but one arrives here and now by a lengthy sojourn of life’s curves. Mr. Shepherd, often stopped along the journey not realizing his here and now, believing he arrived at the big Kensho (enlightenment) only to be—he felt—rudely slapped in the face.

Mr. Shepherd's interest in Zen grows out of an oppressive Catholicism; his nuns are sadists handing out torture:

“. . . Catholicism for the most part represented fear and repression with nary a trace of mysticism and ‘the peace that passeth understanding,’ . . . the Church’s emphasis on sin back then was to spirituality what insecticide was to crops: the former is meant to help the latter grow but just ends up poisoning it. A seed-kernel deep within my soul increasingly yearned for the positive and life-changingly transcendent . . .”

The sixties offered an East-West spiritual journey to a generation morally , ethically and politically disenfranchised, and encouraged a rebellious Gregory Shepherd and his brother Paul to pursue Zen.

Gregory dropped out of the University of Pennsylvania. With Paul he took off for Hawaii, practicing at the Koko An Zendo. Mr. Shepherd traveled between zendos in Hawaii and California, sitting zazen meditation under teachers such as Shunryu Suzuki Roshi at his San Francisco Zen Center and forming a relationship with Robert Aitken Roshi who established his Honolulu Diamond Sangha.

Mr. Shepherd's maps are classics such as The Three Pillars of Zen by Roshi Philip Kapleau and The Teachings of Don Juan by Carlos Castaneda. He devours ancient sutras interpreted by contemporary minds, steeping himself in what he mistakes for an Eastern Buddhist lifestyle while Zen grows in the West. He is not walking the 99 curves straight. Though a map may be about reality, it is not reality.

Transformational therapy transforms its practitioner. This is dying to one’s old life. This death is outside the Catholic Church where no life exists, no self. Mr. Shepherd’s sojourn transforms. Nightmares of no self, fear, rage, and visions of sadistic nuns engulf him. Zen practice is not for the weak.

Mr. Shepherd is unrealized in thinking theory brings him close to the big kensho; nonetheless, he is not weak and wishes to practice. In Hawaii, he speaks to Yamada Roshi who is visiting from Japan:

“I’d like to come to Japan and practice with you at San Un Zendo. Would that be possible? His heavy-lidded eyes fixed me with a probing look. After several long moments he shrugged his shoulders. . . . I had been hoping for something more along the lines of, ‘Dear Child of the Buddha, for so long have I been waiting for you to reach this point!’ But the equivalent of ‘Well, if you really must’ would have to do.”

In Japan, Gregory, who feels certain he stands on the brink of an enlightened life, approaches Yamada Roshi with a labored answer to a famous koan. Roshi treats the incident casually, sensing weakness in Gregory’s presentation.

Japan is a reminder that he is an outsider. Doubts about his kensho eat away at him. He built expectations of himself—a person he did not know—of Japan, a country he felt ostracized him; and of his concept of Zen—his illusion. He wrestled fears, anxiety, and an inability to self-validate. Mr. Shepherd returns to America.

Paul remains in Japan for ten years. Mr. Shepherd struggles, picking up pieces of his Zen practice in America over the next five years. Impoverished, working odd jobs, he falls in love and marries. He remains a strong member of the Diamond Sangha in Hawaii.

A Straight Road with 99 Curves: Coming of Age on the Path of Zen, a Memoir by Gregory Shepherd is a koan about youth in search of a profound life philosophy. Only direct living and dogged patience suffice to mature a genuine awareness of here and now as Zen demands.

The author's prose is uneven. Yet for anyone dying to their old life while holding tightly to expectations of a new life, this book's presentation is strong.

Youngbear Roth (YB) is a journalist, academic research scientist in mental health, and an Integral Yoga therapist. His feature articles have appeared in such magazines as Massage, Tathaastu, and L.A. Yoga.