The Storytellers: Straight Talk from the World's Most Acclaimed Suspense & Thriller Authors 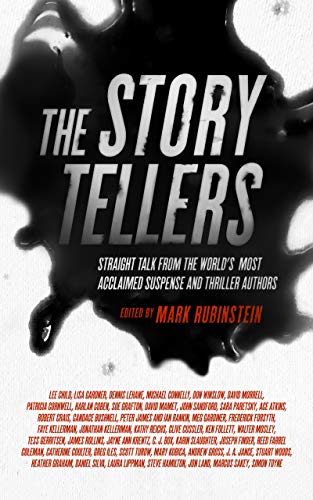 “The Storytellers is a gift to aspiring writers of mysteries and thrillers, readers and fans, and academics alike. An instant classic . . .”

Back in the day, those of us who were undergraduate English majors nursing a secret desire to become a writer at some point in the distant future would keep dog-eared copies of the Paris Review Interviews close at hand for easy reference.

Searching for inspiration or encouragement, or (more mundanely) something to add to an essay, we’d reread for the hundredth time George Plimpton’s interview with Truman Capote, who declared he couldn’t write unless he was lying down, or the one with Ernest Hemingway, who provided Plimpton with his famous iceberg analogy, that seven-eighths of a book is underwater for every part that shows. Copious notes written in the end pages enabled quick thumbing to similar nuggets from Kurt Vonnegut, William Faulkner, and Georges Simenon.

Imagine, then, with what delight we receive a copy of Storytellers: Straight Talk from the World’s Most Acclaimed Suspense and Thriller Authors, edited by Mark Rubinstein.

A treasure trove of interviews conducted by Rubinstein with 42 different authors including Lee Child, Michael Connelly, Sara Paretsky, and the late Sue Grafton, Story Tellers gives us a peek behind the curtain where today’s bestselling mystery and thriller authors work their craft and spin their magic. Conducted between 2014 and 2017, some of this material appeared in Rubinstein’s Huffington Post blog while others were the result of subsequent conversations that took place elsewhere.

Several interesting thematic threads emerge in these interviews, patiently brought out by Rubinstein through his thoughtful questioning.

For example, several authors comment on the notion that genre fiction is somehow inferior to mainstream literature. Dennis Lehane observes that in 1993 crime fiction was very much ghettoized as a genre, and that he felt himself “rebelling against the notion that literary fiction was the only kind of literature.” Ironically, he later discovered after the publication of Mystic River that he was suddenly viewed as a “literary writer.”

Don Winslow declares, “I’m a genre guy, and there’s that slight stink on us.” Sara Paretsky believes that crime writers “are not viewed as being as important as so-called literary writers; that creates a different and more collegial atmosphere [among us].” Tess Gerritsen wisely notes that “There’s a large readership for genre fiction. I’m certainly not going to turn up my nose at readers.”

Many authors also provide fascinating insight into their well-known series protagonists. Lee Child, for example, talks about Reacher as an archetype familiar in American Westerns, sagas from the Middle Ages, and Scandinavian and Anglo-Saxon legends. Kathy Reichs admits that readers often confuse her with her main character, Temperance Brennan, while C. J. Box describes writing his Joe Pickett novels “in real time. He gets a year older with each novel.” Jonathan Kellerman talks about Alex Cross having “mellowed out over the years.”

Almost every reader loves an origin story, and Rubinstein draws out a few gems related to the early beginnings of some of these authors. C. J. Box, for instance, describes having sent off his first typescript to an agent from whom he heard nothing for four years. Finally, while attending a writing conference, he learned the agent had been dead for six months.

Also amusing is Heather Graham’s recollection of her husband bringing home a typewriter because she had talked about wanting to write. However, it was missing the “e” key, and “Every night I filled in the e’s on whatever I’d written.” Then there’s Lisa Gardner, who worked as a waitress at a restaurant while trying to get her first manuscript written. She frequently set her hair on fire while serving a flaming brandy-flavored appetizer: “I’m really grateful every day that the writing thing worked out.”

A few of Rubinstein’s questions are less interesting than others. For example, he ends most of the interviews by suggesting a scenario in which the author is hosting a dinner party and can invite any five people, living or dead. The answers, for the most part, are awkward and not particularly insightful.

Beyond this and one or two other rare clunkers, and a few authors who are unfortunately not quite as interesting as they themselves think they are, Rubinstein has done a terrific job of delving into the work habits, thought processes, and formative experiences of some of the most important authors in the genre.

The Storytellers is a gift to aspiring writers of mysteries and thrillers, readers and fans, and academics alike. An instant classic, there’s no doubt that it will find its place on the bookshelf right next to those volumes of the Paris Review Interviews that still get thumbed through by many of us from time to time.