The Storyteller's Secret: A Novel 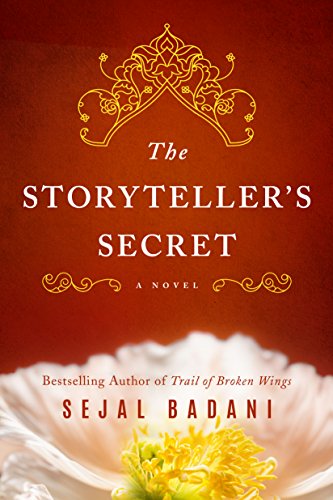 “The Storyteller’s Secret is a lavishly told tale of secrets, love, and loyalty. It is a celebration of the beauty of story and its ability to help us be heard and understood.”

Jaya, a journalist in New York, is desperate for closeness and connection. Growing up as the only child of Indian immigrants, she has never been able to bridge the distance between her mother and herself and desperately longs for a child of her own. Her world begins to unravel after her third miscarriage, and she and her husband separate, neither of them able to deal with their grief. She decides to visit her parents and, while there, learns that her grandfather in India is dying and wishes to give Jaya’s mother a gift.

Jaya knows nothing of her mother’s childhood in India and is desperate to find her own identity. Her mother, Lena, refuses to return to a place that has caused her pain. Though she knows she is running from her own problems, Jaya makes the decision to step into her mother’s place and travel to meet her dying grandfather. Her mother does not wish her to go, but will not explain why. In turn, Jaya does not tell her mother that she has lost herself in her grief and that her “roots have been stripped.” It is her hope that meeting her grandfather will help her discover the connectedness she craves.

When Jaya arrives in India she is greeted by Ravi, her grandmother’s servant and most trusted confidante and friend. He informs her that her grandfather has died, and that he is now in possession of the gift her grandfather wanted Jaya’s mother to receive. In order for Jaya to receive her mother’s gift, Ravi says, “. . . first you must listen to a story.” And it is within this frame that Jaya’s grandmother, the storyteller Amisha, comes to life.

As Jaya listens to the tale of her grandmother, it becomes apparent that Amisha was an exceptional woman. Her story begins at her wedding ceremony in the 1930s during a time when the British occupied India. It is clear from the start that Amisha is different. From the hiring of the untouchable Ravi when she was a young wife to the love and care she gives her family at her own personal expense, Amisha is a character at once likable and respected. And she is, above all, a storyteller. As a woman in a patriarchal society, her opportunities for education are extremely limited. Stories are not only the way in which she understands the world and its complexities, she believes they are sacred tales placed in her keeping by the gods.

Her greatest longing is to write down her stories, and when Amisha is given the opportunity to teach storytelling in the British school in exchange for a chance to learn English, she is thrilled. But it is at this school where she will understand most acutely the limitations of being a woman in India. Though she is able to find joy and escape in her stories, it is clear that words will not be enough. “When she wrote, she was transported to a place where she discovered who she was but could never be.” And, eventually, this inability to be the person she is breaks Amisha.

But The Storyteller’s Secret is Jaya’s story as well. As Jaya comes to understand her grandmother and the sacrifices she was forced to make, she realizes the extreme blessing her life has been and comes to understand her own mother’s great love for her. Buoyed by the resilience of those who have so little, Jaya begins to mend and her grandmother’s life story gives Jaya the courage to move forward past her pain.

The Storyteller’s Secret is a novel that transports you to another place and time. Sejal Badani does an excellent job propelling the reader back and forth between the 1930s and today with her use of present and past tense, and her descriptions of India and its culture are fascinating. The framing of Amisha’s life within story is the perfect vehicle for a narrative about the power of words. The Storyteller’s Secret is a lavishly told tale of secrets, love, and loyalty. It is a celebration of the beauty of story and its ability to help us be heard and understood.