The Story Paradox: How Our Love of Storytelling Builds Societies and Tears them Down 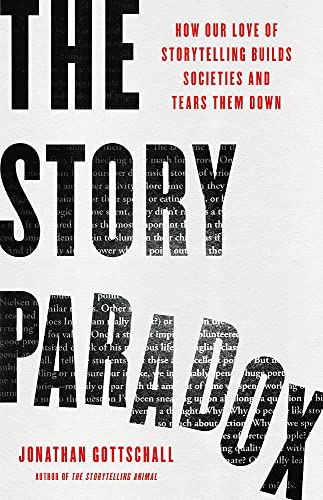 “One story that is far from convincing, showing not much of story’s fabled power at all.”

Jonathan Gottschall writes about the intersection of science and language. In The Story Paradox he uses some scientific research and much anecdotal argument to try to convince readers of the fundamentally destructive nature of storytelling. While he admits that stories can be good for societies by creating shared values and context, ultimately he settles on the primary function of storytelling as “sway”:

“All the tireless communicating we do throughout our lives has a main overriding purpose. The purpose is to influence other minds—to sway how people think, feel, and ultimately behave. Whenever we communicate, we’re using airy and insubstantial words to move each other around, if only a little, thereby rearranging the world in our favor.”

That’s quite a claim, one made authoritatively with absolutely no proof beyond repeating the same assertion in different forms throughout the book. One could argue that storytelling’s main goal is to share an experience, to figure out meaning in an otherwise incoherent stream of events, to build an identity, to teach, to warn, to help. Does poetry “sway” anyone? Does literature? Later in the book Gottschall proposes that the inherent moral or message in any piece of literature provides exactly the kind of sway he initially proposes. How does an evocative poem, one that’s meant to do no more than convey an experience, become a tool of this kind of propaganda?

It’s an argument that this reviewer couldn’t help thinking is relentlessly male. Few women feel like their words have much power to convince anyone. The image springs to mind of the current vice president, a Black woman, being constantly interrupted as she protested, “I’m still speaking.” The sentiment was so universal for women that it quickly became a favorite T-shirt slogan. Women use stories—including gossip—to build connections, understandings, a sense of shared community and values. So the kind of storytelling Gottschall describes is that done by those in power, not storytelling in general. This is an important distinction to make. Is it storytelling that is so destructive or the powerful people’s need to cling to power however they can?

Gottschall insists that storytelling has a unique power. He admits, “This is a wonderful thing when story’s huge capacity for good is channeled to promote empathy, understanding, charity, and peace. But the swayful magic of storytelling is just as good at sowing division, distrust, and hatred.”

One could argue that the solution to that is not to condemn storytelling, but to develop critical thinking. After all, when a Nigerian prince sends you an email promising a treasure if you will simply provide the necessary bank details, is this a story most rational people will believe? Are the many spam phone calls we all receive each day convincing?

Gottschall refuses to blame the way the public is now flooded with stories, with fake news. The stories themselves, he insists, are the root of all evil:

“When I say stories are driving the whole species mad, here’s what I mean. It isn’t social media making us crazy and cruel, it’s the stories social media spreads. It isn’t politics severing us from one another, it’s the wedge-shaped stories politicians tell. It isn’t the marketing driving us toward planet-killing overconsumption, it’s the happily-ever-after fantasies that marketers spin.”

Again, wouldn’t better critical thinking allow people to sort the good, useful stories from the manipulative ones? And isn’t social media itself a big part of the problem by creating a sense of a community that one can belong to if only one consumes a constant stream of posts, many of which aren’t stories at all, but supposed glimpses into other people’s perfect lives.

Gottschall uses students in his classes to prove how insidious our daily consumption of stories is. “By the economic logic of time spent, story didn’t rank as a two or three in their lives. Story was a ten. It measured out as the most important thing in their lives.”

Except it didn’t. Use of their phones, endless scrolling through news sites, Instagram, and Twitter were all counted by Gottschall as stories. Tweets are not stories, nor are most social media posts. This evidence is followed up a research study from Harvard and the University of Virginia in which subjects were brought into a lab and given a choice. They could either push a button to receive a safe but painful electric shock or they could sit for ten minutes doing nothing. Most men chose the shock. The horror of facing their own minds, Gottschall proposes, was too much to bear. They needed the endless distraction of stories. Women, incidentally, who took part in the study, overwhelmingly chose the ten minutes in their own heads.

This isn’t an argument for how seductive stories are, but of how addictive social media is. If these subjects had to leave their phones off for a day, they would have been similarly twitchy. Reading a book or a newspaper wouldn’t have sufficed at all.

All of this is to say that Gottschall is confusing two effects. He sums up the addictive nature of stories this way:

“Of course, story doesn’t count as a drug if you narrowly define drugs as chemical substances. But stories are still something we ‘take’ to literally change our brain chemistry. Like other drugs, we use story to relieve our pain, loneliness, and drudgery. And just like other drugs, story lulls us into an altered state of consciousness that bears comparison to a hypnotic trance—or even a psilocybin trip . . .  When the ‘active ingredients’ of a story—the plot, theme, character, style, and so on—are expertly compounded, we slide into highly receptive brain states that bring us under the storyteller’s power.”

Is this true of stories or social media? If you took “stories” off screens, would readers be as compulsive? Facebook engineers have admitted the built-in addictive elements in their product. The feedback of “likes” and other engagement has been relentless analyzed as creating a compulsive connection between consumers and screens. By conflating social media and storytelling, Gottschall weakens his argument. None of the scientific studies he later cites do anything to confute the basic confusion he starts out with.

There are many more chapters in the book that strive to show the power of storytelling while condemning it. For a more useful look at the effective elements of narrative, readers should turn instead to George Saunders’ A Swim in a Pond in the Rain. Gottschall’s chapters on how religions use stories to create identities through us versus them narratives is similarly lopsided, as are the ones on fake news. In the end, Gottschall crafts a story that is simply not convincing, undermining his own claim of the ultimate power of storytelling. His is one story that is far from convincing, showing not much of story’s fabled power at all.