This Story Is a Lie 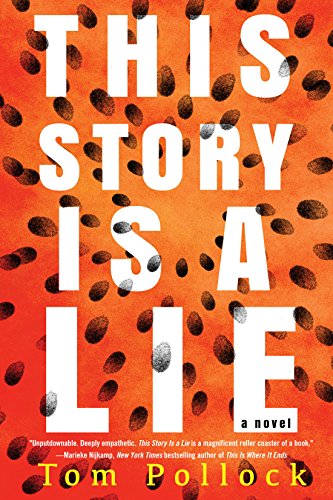 “a terrific YA thriller. . . . Peter Blankman’s blurred perception of what’s happening to him intrigues us from the first page to the very last.”

Seventeen-year-old Peter Blankman suffers from severe anxiety attacks. His twin sister Bel has been assigned by their mother, a brilliant scientist, to keep a close eye on him whenever possible. Together they’ve coached Peter to follow three steps when an attack is imminent: one, get moving, which usually means run; two, get talking, in order to verbalize his feelings; and three, get counting.

This last line of defense is consistent with Peter’s special talent—he’s a mathematics prodigy. To counteract his rising panic, for example, he counts the square roots of whole numbers, to six decimal places. He counts windows in buildings, tiles in ceilings, and the number of steps between himself and each exit.

What Peter doesn’t count on is a sudden and unexpected knife attack on his mother at an awards ceremony, and the simultaneous disappearance of his beloved sister. When he’s taken captive by a mysterious underground unit that may or may not be connected to the British secret service, Peter must decide where to place his trust. In Ingrid, his friend? In clandestine agent Rita and her unit, known as 57? In his mum? Or in his sister, Bel, who seems to have developed amazing—and disturbing—powers of her own?

Tom Pollock’s Young Adult novel This Story Is a Lie could variously be described as a psychological thriller, a math thriller, and a surrealistic puzzler. The title derives from what’s known as the liar’s paradox, in which the assertion “This statement is a lie” can’t be true without being false, and can’t be false without being true.

Proposed by Gödel, the paradox suggests that mathematics is fundamentally limited. He formulated an equation to prove it by taking three steps: encrypt, using code to convert proof into an arithmetic relationship; invert, define the opposite of the relationship; and recoil, in which recursion defines an improvable equation that calls on itself to prove that it’s unsolvable.

Pollock structures his novel after Gödel’s approach, alternating between events in the present and recursions into the past that develop our understanding of Peter’s anxieties and his relationships with the three key people in his life. It’s an effective way to flesh out the plot and build suspense.

The story is told through interior monologue from Peter’s point of view, which further clouds our perception of what’s real and what might be imagined. Peter’s belief that mathematics can bring order to his chaotic life is severely shaken by his discovery of Gödel’s paradox and its resultant uncertainty. His occasional brief fantasies about being secret agent P. W. Blankman (“special citations for cunning, courage, and calculus”), soon understood as inversions of his actual personality, begin to shake our own certainty about the reality of what we’re reading.

Peter and his twin sister Bel, “two neurologically engineered teenagers,” are well-drawn characters, as are his mother, secret agent Rita, and his friend Ingrid (Agent Blonde Calculating Machine). They lend plausibility to the baseline assumption that what we’re reading is real while at the same time teasing us with the possibility that something far different may be going on.

Indeed, the only false note for some may be Pollock’s frequent use of foul language. It’s a decision young adult authors and their editors are making more often these days. While the desire to remain relevant to modern young readers is understandable, it would be nice to think that YA fiction could operate just as effectively on a slightly higher plane, vocabulary-wise. There are, after all, many ways to express strong emotion without constantly resorting to the f-word, which pops up on average about once every four to five pages (yes, like Peter, I was counting). Its use is often gratuitous, and overall it feels somewhat excessive.

This possible blemish aside, This Story Is a Lie is a terrific YA thriller. It’s enjoyable to read, the math underpinning provides solid food for thought without being too daunting for readers who may lack confidence with the subject, and Peter Blankman’s blurred perception of what’s happening to him intrigues us from the first page to the very last.