The Story of Ain't: America, Its Language, and the Most Controversial Dictionary Ever Published by David Skinner (2012-10-09) 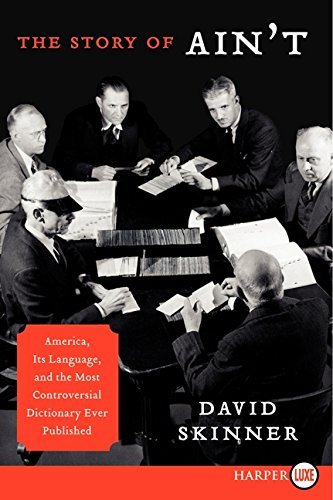 Picture the editorial offices of the G. & C. Merriam Company as a hushed and serious group of literati prepare the entries for the Third Edition of Webster’s Dictionary.

Suit jackets adorn chair backs, but ties remain in place. Stacks of paper bearing single words tower on each desk. Considered the intelligentsia of the lexicographer’s world, the editors stood as the supreme authority of correctness—until publication of Webster’s Third changed everything in 1961.

It’s hard to imagine that a new edition of a dictionary would set off a firestorm, but that’s exactly what happened. Author David Skinner deftly chronicles the events that led up to and followed publication, surprising even himself as he uncovered the arguments on both sides of the controversy.

Using evidence from documents and articles, Mr. Skinner weaves a true tale fascinating not just to linguists and lexicographers, but to anyone interested in the evolution of our language during a critical period in America’s History.

To begin at the beginning, Noah Webster published An American Dictionary of the English Language in 1828. Its stated purpose was simply “to unite (our) countrymen culturally and politically.”

A Second Edition followed a century later. In those days, Webster sought to be the voice of authority as THE Dictionary (note the capital D). American English was exploding with new words coming from historic, scientific and technological changes.

In 1950, for example a special addendum to a reprint of Webster’s Second contained 34 pages of new terms, like cold war, A-bomb, and the Manhattan Project. New everyday terms included polyester, pizza, prefab, and station wagon. This addendum should have signaled the need for changes to come.

Less than 30 years passed before Webster’s Third Edition surfaced, published out of necessity to accommodate over 100,000 new entries taken from a world that started to spin a lot faster. Between 1934 and 1961, the country experienced The Great Depression, The New Deal, World War II, the baby boom, expanded roadways and road travel. More women entered the workplace and more people sought higher education.

Also within this period, The National Council of Teachers of English realized that language curricula had to change. The “static and authoritarian point of view” no longer applied. Instead, the Council espoused five basic concepts which offered the following:

3 )Spoken language is the language;

4) Correctness rests upon usage; and

This became Philip Gove’s credo and he assumed the leadership for publication of Webster’s Third Edition.

Mr. Gove felt that it was time for a less elitist and inclusive method for lexicographers to follow. This meant “fidelity to the language as real people used it.” Eccentric and determined, he dared to drift from the notion that Webster was the supreme authority. He was not afraid to speak the awful truth, and even enjoyed saying that a dictionary was “a selective inventory of the language.”

Critics licked their lips. Journalists tore apart the original press releases from G. & C. Merriam announcing the publication of Webster’s Third. The word ain’t and many others which were actually included in previous printings as vulgar or slang, were now considered part of everyday usage. This became the centerpiece of the debate. The radical departure in philosophy made the company vulnerable to takeover.

The controversy raged, with other reviewers dubbing it “a staggering accomplishment.” The dreaded takeover never happened. Sales exceeded expectations—a hollow victory to some loyalists who also realized that the ideal of being the ultimate authority had died along with the debate.

There is much in this work that the average reader will find fascinating, especially those with an interest in the evolution of language. H. L. Mencken once said that American English started to evolve as soon as the Mayflower hit the beach. The author says Mencken offered “uninhibited and brassy English brimming with neologisms. In 1919, Mencken wrote:

“American writers were finally able to take flight from the old tree and to trust for the first time their own dialect.”

Mr. Skinner includes other examples of an evolving language. For example, Presidents Andrew Jackson and Abraham Lincoln felt no shame in offering their plain-speaking talk to plain-speaking people. The accelerated pace of change occurring during the 20th century provided more grist for the mill.

Zora Neale Hurston captured the language of the south; Steinbeck that of America’s heartland.

Of perhaps greater interest to historians, linguists and lexicographers might be the key players involved in the great debate. Credible individuals contributed to both sides of the argument giving the reader an appreciation of just how long and difficult this debate became.

The Third Edition represented a cultural revolution, which many were unready to accept. The old and new editions were as different as the times (1934 vs. 1961) in which they were published.

This could have been a simple chronicle of the publication of a new edition of a dictionary. Instead, it is a social and cultural history of the time. The author’s research is detailed and creative in its inclusion of personal details about the key players. He ends with a quote from Lyndon Baines Johnson commenting on the world of a president as being out of touch with reality. People treat him as if he were the smartest man in the world.

“And you all know he ain’t,” he concludes.