This Storm: A novel 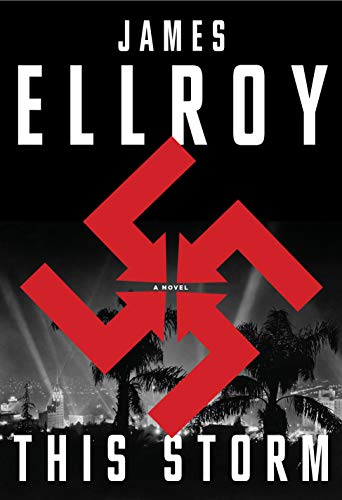 “Like a machine gun spraying noir at you nonstop. Can you take it? Can you parse the churning prose, figure out what the hell’s going on, and keep turning the pages? All 577 of them?”

James Ellroy is considered the greatest crime fiction author alive today and a major literary figure, according to the biographical note at the end of This Storm, his newest novel. The acknowledged master of west coast noir, his hard-boiled mysteries chronicle the history of Los Angeles and its police department during the middle of the previous century.

His rise to the top arguably began with the famous L.A. Quartet, comprised of The Black Dahlia (1987), The Big Nowhere (1988), L.A. Confidential (1990), and White Jazz (1992). And now that this quartet has been reprinted by Everyman’s Library, Ellroy joyfully tells us on his website that he’s arrived in the “august company of hotshots like Albert Camus, John Updike . . . Joseph Heller, and the kooly contemporary Joan Didion and Salman Rushdie—kats who, of kourse, I’ve never read.”

These days Ellroy’s hard at work on his Second L.A. Quartet. The first novel published in this new series was Perfidia (2014). Beginning in L.A. on December 6, 1941, hours before the attack on Pearl Harbor, it examines the following 23 days and focuses on Japanese internment, the horrific murder of a Japanese family, and the political storm that follows.

This Storm resumes the action the day after the conclusion of Perfidia. It features a crowded slate of characters from the opening novel and from other Ellroy works. The cops are all still bent and broken, and the victims are all still pathetic and desperate.

In fact, there are so many characters that the author thoughtfully provides a Dramatis Personae at the back of the book, complete with notations as to previous appearances elsewhere in the Ellroy canon. There are 90 characters in this list. Just so you know.

The density of Ellroy’s story, in which we are obliged to follow so many threads that the list is necessary to help us when we lose track, is exacerbated by his narrative style. And here, truly, is where readers need to make a decision.

Over the course of his writing career, Ellroy slid into a style in which his narrator barfs out countless story threads in a stream of consciousness featuring short sentences of five or six words, short paragraphs, and kaleidoscopic shifts in perspective.

This Storm, for example, begins with LAPD Sergeant Elmer Jackson on a stakeout:

“It’s a stag hunt. The PD worked that way. Four victims mugshot-ID’d Tommy. The Chief and Dudley Smith conferred. They called it. Per always: perv shit on women Mandates DEATH.

“Elmer gargled Old Crow. He had the front-house car. Mike Breuning and Dick Carlisle had the alley. Tommy had the crib cased. Two leggy sisters lived there. Lockstep surveillance locked down the gestalt.”

It’s a style. Some like it; some don’t. But it goes on and on. For 577 pages. Like a machine gun spraying noir at you nonstop. Can you take it? Can you parse the churning prose, figure out what the hell’s going on, and keep turning the pages? All 577 of them?

While Ellroy’s in the middle of a very ambitious story arc, and he’s employing a time-honored narrative technique sure enough, the question is not whether he’s the Demon Dog of American Literature, as he loves to call himself, or whether he’s producing crime fiction worthy of the ages.

The question is whether or not This Storm is readable.

In point of fact, it’s not. It will most certainly appear on the reading lists of many college courses right away. Students will be expected to plow through it, but they’ll need to set aside four to six days and keep a notebook handy. Who else? Die-hard Ellroy fans already hip to his groove will read it, or at least claim they have. We won’t submit them to a lie detector test though, will we?

But what about regular readers? The hoi polloi? The mystery loving proletariat? Busy people with busy lives who have to think very carefully about how they want to invest their precious reading time?

Perhaps James Ellroy is the greatest American novelist ever, as he and Stephen King both assure us, but most readers will be too exhausted after battling through the first few chapters to argue the point.

The fact is, out here in the mainstream where the book-buying dollars are spent, readers learn to pick their battles carefully. They’ll be more than willing to leave This Storm to the university professors, graduate students, and the Extremely Serious Noiristas, and instead choose something they can actually enjoy reading.