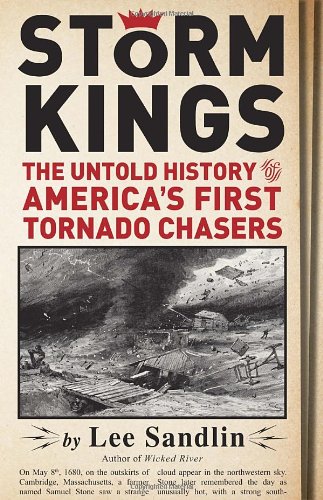 “The author takes us along for the ride. Readers will definitely feel its gale force.”

Storm Kings is not merely a theoretical or data-driven history of tornados and meteorology. Using his skills as a brilliant storyteller, Lee Sandlin places the reader in the middle of a storm, where he becomes
an eyewitness to the helplessness, fear, destruction, and psychological aftermath of tornados.

In the early days of this nation, there was little science and lots of folklore related to storms. Witnesses relied on their observations—which bordered on the supernatural. They described darkening skies glowing green and red, while winds moaned or whistled—surely a sign of God’s wrath. Winds cut swaths miles long in forested areas and towns, creating destruction that took decades to clear and repair.

The truth is that even with today’s Doppler radar capability we can predict but not prevent tornados. We have succeeded in saving lives through improved early warning systems but remain vulnerable to the destruction of nature’s forces.

There is a lot of information in this book which can pique the interest of even the casual reader.
What is a tornado, for example? The author provides a most understandable explanation:

Picture a pot of water heating on the stove. Heated water on the bottom produces bubbles that force their way through the cooler water on top— convection. The same is true with the earth: “convection columns force heat from the earth to higher altitudes. The most dramatic and violent of these is the tornado.”

The “super cell” tornado has its genesis in a powerful thunderstorm containing a continuously rotating updraft of air. These violent storms remain on the ground for one hour or more and clock winds greater than 200 mph.

“A tornado can be thought of as a last ditch safety valve; it comes into existence only when the atmosphere is growing catastrophically unstable. It’s a kind of emergency self-regulating mechanism that funnels huge volumes of hot air upward as fast as possible and restores the atmosphere to equilibrium.”

Mr. Sandlin provides vivid accounts of many storms, including the Peshtigo “fire tornado” in 1871, resulting from a combination of wind, drought and combustion. The chemical reaction of silica in the air left some of the destruction encased in glass. The tri-state tornado of 1925 left a mile-wide path of destruction through Missouri, Illinois and Indiana.

Conditions for tornados are ideal in the central plains of this country since treeless landscapes can create atmospheric instability. Oklahoma, Kansas and Iowa are known as “ Tornado Alley,” although statistically speaking a tornado is a relatively rare occurrence, even in those areas.

The author also acquaints us with the evolution of meteorology. In the early days of weather records, everyone was either fascinated by or fearful of bad weather. Self-appointed scientists entertained willing listeners on the Lyceum Circuit; fanatics kept records of every weather event. Infighting and struggles emerged as theorists disagreed about the origin and structure of storms.

Scraps of evidence—taken from official government records, newspaper morgues and family trunks ultimately produced a body of knowledge worthy of being called credible: “from them a strange kind of history does emerge—not a succession of blandly uplifting technological triumphs, but something more ambiguous: a story of doubts and blind guesses, grinding stupidity and unaccountable insight, horrifying violence and mysterious beauty”

This information came from a community of early pioneers, many of whom faded into obscurity. All were addicted to the elusive understanding of weather.

Among these early theorists was Ben Franklin in his pre-diplomat/statesman days. He pursued meteorology as a hobby but later resolved to understand atmospheric electricity. Thus his fascination with kites. The world benefited from both his knowledge and his prolific writings.

James Espy was also known as “The Storm King.” He vigorously debated men with opposing opinions regarding meteorology. Thousands followed these accounts in newspapers. He is remembered as the country’s first weather scientist.

John Park Finley began his career in the military when the Army Air Corps realized the importance of storm prediction. He originated a network of “spotters” stationed all over the country who generated reams of paper and mostly useless data. Meanwhile, the National Weather Service emerged focusing on predictions for farmers and urban safety.

Because of the author’s ability to draw the reader into the “eye of the storm,” he creates an appreciation for both the enormity of storms and for the dogged determination of meteorology’s early historians. Admittedly the story bogs down in spots where the feuds and debates take center stage.

But this is not unlike the evolution of theory in any discipline (picture Darwin and his contemporaries). An individual will offer his supposed theory, only to be disputed by another person’s observations and hypotheses. The science of meteorology is no exception. As a nation, we have come a long way in the field of meteorology, given advances in technology, data collection, analysis, and—some might argue—prediction.

Lee Sandlin uses the old song about “ghost riders in the sky” as a metaphor for today’s amateur storm chasers who continue in the tradition of James Espy and John Park Finley. Professionals and amateurs alike continue their quest—thundering onward across the endless skies.

The author takes us along for the ride. Readers will definitely feel its gale force.