The Storm Before Atlanta 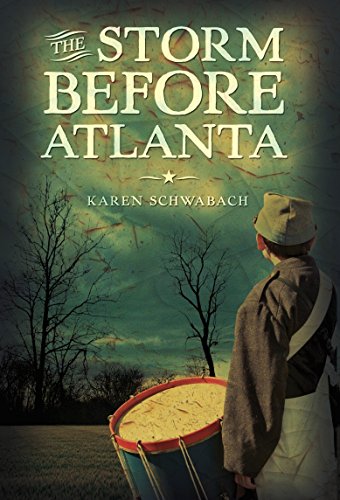 Why would a 10-year-old boy wish to die in battle? Could a life that has not yet truly begun be so easily forsaken?

Jeremy DeGroot’s circumstances are not ideal. His father is in jail. He is an indentured servant on the run, trying to support himself by selling newspapers barefoot through the cold streets of Syracuse, New York. The Civil War headlines he delivers speak of the glory and honor of death on the battlefield and he decides to make the ultimate sacrifice in order to join their ranks. By becoming a casualty of war, he believes he will finally obtain the respect and dignity lacking in his life.

Karen Schwabach demonstrates the persuasive power of propaganda on the youngest members of society in The Storm Before Atlanta.

Schwabach divides the book’s focus in order to give the reader a taste of the time period from different viewpoints. Jeremy, an innocent, now has seen the elephant (witnessed the death of others during battle). Charlie, a poor Southerner, is questioning the basis of fighting so that rich plantation owners can retain their labor force. Dulcie, a newly freed slave, is discovering the world of possibilities open to her as a paid medic for the Union forces.

The shifting worldviews during such a pivotal time in American history are shown in the thoughts and actions of a Federalist, a Confederate, and a former slave. The educational value for young readers is immeasurable.

These three characters are all heading toward the burning of Atlanta so memorably portrayed in Gone With the Wind. The South is falling, but not without a fight. As Jeremy sets the pace for the marching soldiers, the last remnants of a collapsing society are on display. The uniforms of the Confederacy are taken from the bodies of the Union’s dead. Their hospital tents lack the crucial supplies of morphine and anesthesia. Their cooking fires are without the basics of coffee and hardtack. Charlie realizes the devastating odds stacked against his comrades. His decision to protect Jeremy and Dulcie from his fellow rebel soldiers shows just how much he doubts the rationalizations behind the South’s cause.

Schwabach peppers the narrative with twists and turns. It is discovered that one of the soldiers in Jeremy’s regiment is a woman. Another character admits that black blood is running through his veins. A nod is even given to the historic election of Barack Obama when Jeremy’s fellow soldiers ponder the possibility of there one day being an African American president.

But above all, the true picture of war shatters “The Drummer Boy of Shiloh” image that lured Jeremy into the fight. Death is not the pretty picture immortalized in the song. It is full of blood and infection, agonized screams, and sawed-off limbs. Muddy fields, torrential rain, scorching sun, and worm-infested food make up the rest.

Does Jeremy ultimately come to an understanding of all of war’s evils by novel’s end? Will the renown of his legacy be passed down through generations?