Stories My Father Told Me: Notes from "The Lyons Den" 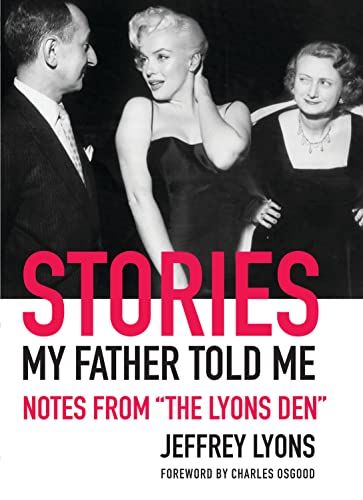 “Such promise. Such disappointment. . . . Had Lyons the Younger been willing to step aside and let his father speak for himself, the result would likely have been vastly more accurate, not to mention more lively and captivating.”

After being briefly enchanted by the cover photograph for Stories My Father Told Me: Notes from “The Lyons Den” (on which a dapper columnist Leonard Lyons stares, rapt, into a vamping Marilyn Monroe’s unblinking eyes, while his wife—who has the emotive face of a young Fanny Brice—looks on, sneering, hands on hips), the reader finds that things go very quickly down from there.

Such promise. Such disappointment.

After a long introduction by film and theater critic Jeffrey Lyons, who tells us of the career of his father Leonard Lyons, who spent the better part of 50 years slinging about the goings on of the Great White Way—or, as Lyons the Younger puts it:

“He wrote an astonishing 12,479 columns, each 1,000 words long. The only day he missed was the day his mother died. One or two had been ‘evergreen’ columns he’d run while travelling overseas, or on a rare occasion one was written by a guest. His columns provide a history of a glorious time in America and wherever he traveled.”

True enough. Perhaps there was not better time for writing about celebrity doings than in the 1930s, ’40s’ and ’50s—“The Lyons Den” ran in The New York Post from May 20, 1934 until Lyons’ retirement in 1974—and no better place than in New York City.

“The city was alive in those mostly pre-television days, buzzing with excitement every night. He’d [Leonard Lyons] walk into Toots Shor’s on West Fifty-Second Street and sit with Jackie Gleason or Mickey Mantle, meet the Duke and Duchess of Windsor down the block at the posh ’21,’ have tea with Marlene Dietrich at the Russian Tea Room, or sit with Richard Burton and Elizabeth Taylor at Downey’s. All in one night! Every night! Six nights a week!”

Pretty heady stuff. And enough to make the reader all but pant with expectation as he finished the introduction and dove into the book itself.

Sadly, the result was rather like diving head first into a cool blue pool, only to discover on entry just how shallow the water was.

What follows, instead of the panoply of hijinks, witticisms, and blind items that 40 years of 1,000-word-a-night-every-night copy suggests, is a series of rather clunky biographies/interviews/career recaps for the great and near great who were mentioned in Lyons’ original column. Plus, rather mysteriously, people like Penelope Cruz, who likely had not yet been born by the time Lyons retired nearly 40 years ago.

Would that Lyons the Younger had simply decided to publish the columns instead. Instead, we get a crazy quilt of items. There are some by Leonard, others by Jeffrey—apparently—although none are attributed to their source until we reach the last portion of the book, entitled “The Next Generation,” when Jeffery attempts to fit into his father’s shoes. The result is most certainly not crazy by any entertaining meanings of the word, nor is it a proper quilt. It is, instead, something rather raggedy and ill fitting.

The reader stumbles ahead, however, looking for anything that might have little enough mold on it to be able to share, as one might search the cheese drawer looking for something with little enough rind to give with crackers to drop-in guests.

Instead, the reader sees this, and becomes irate:

In the brief chapter on Noel Coward (“When you think of British sophistication and urbane wit, no one outdid Sir Noel Coward, the writer, composer, playwright and actor . . .”), author Lyons shares a rather dull anecdote concerning actress Lauren Bacall’s worrying over whether or not “she would have to carry anything” by way of props for a television production of Blythe Spirit in which Coward wanted her to play the lead ghost, Elvira. Bacall reportedly hated to carry props.

After serving up the punch line (Bacall: “So what would I carry?” Coward: “Only the play my dear. Only the play.”), Jeffrey Lyons writes, “Unfortunately, that production was never staged,” at which point this reader slammed the book shut for a time.

My anger arose from the fact that the production was staged, rather famously, with Coward in the male lead; Bacall as Elvira; Claudette Colbert as the surviving wife, Ruth; and Mildred Natwick as the psychic, Madame Arcati. It was considered a triumph (due to its staggering ratings) on CBS in 1956 and revitalized Coward’s then-flagging career.

But perhaps it aired while Lyons the Elder was having tea with Marlene Dietrich; perhaps that is why he missed it.

The problem with a book like this is that, for it to work at all, the authors have to get their quotes right, their dates right, and their facts right. If they do not, then what we have is a work of fiction and not a record of a lifetime spent in journalism as we have been promised.

If Mr. Lyons the Elder had gotten this wrong—I doubt he would have, and yet we can never know, as he passed away decades ago—it might have been forgivable if he were writing his memoir at the time of his retirement, his memory grown a bit hazy over time. But it is quite unforgivable today, in the age of Google, even Wikipedia. That Jeffrey Lyons allowed genuine misinformation into the book weakens what was already a disappointingly dull thing into something unworthy of the time it takes to read it.

With the information on Noel Coward wrong, shall we accept in good faith what has been written about Orson Welles? Or Danny Kaye? Or Marilyn Monroe (and upon reaching her listing, on page 234, we find out that the wonderful cover photo was likely staged, which undermines the one good laugh the book had to begin with) for that matter.

Among the quips, quotes, and errata that the book has to offer are:

This, about actress Tallulah Bankhead, in which Lyons writes: “When she opened in The Skin of Our Teeth to rave reviews on Broadway, another actress said, ‘Tallulah’s always skating on thin ice, and people want to be there when it breaks.’”

Or this, in which Lyons explains comic and television star Milton Berle’s nature off-screen by quoting that “Fred Allen said of Milton Berle: ‘If ego were acid, Berle would’ve consumed himself long ago.’”

Or this bit, in which Lyons reflects upon the peculiar career track of stripper and comedienne Gypsy Rose Lee: “In April 1953, she reflected on the fact that in the preceding year, she’d made more money than she had in her long career. She was asked if she ever felt any embarrassment as a stripper.

“’Only at the beginning,’ she recalled, ‘but that didn’t last long. Only the first hundred stares are the hardest.”

Or, finally, in what may be the freshest and most funny entry in the entire book: a brief look at then-President Lyndon Baines Johnson: “In September 1968, Lady Bird Johnson was entertaining 5,000 underprivileged youngsters on the White House lawn where a rock band performed a spirited number. Suddenly LBJ appeared on the White House balcony and simply said, ‘Cool it!’ then returned inside to a Cabinet session.”

Had Jeffrey Lyons opted to take the more difficult path and to tightly edit his father’s old columns into a chronically ordered tapestry of American society and celebrity life during its heyday in Manhattan, he would have been on to something. All the best material in the book belongs, after all, to Lyons the Elder—it is he who moved in celebrity circles and he who recorded their actions and words first hand.

Had Lyons the Younger been willing to step aside and let his father speak for himself, the result would likely have been vastly more accurate, not to mention more lively and captivating.