Stories I Tell Myself: Growing Up with Hunter S. Thompson 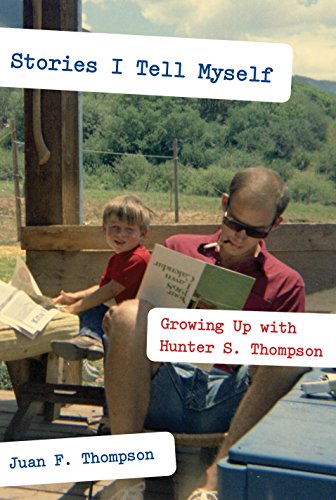 Many readers will pick up this book purely to discover more about the legendary “wild man of American journalism” Hunter S. Thompson, and they won’t be disappointed. Written by his son, Juan F. Thompson, it certainly provides insights into the train crash of a life shared with Sandy, wife of Hunter and mother of Juan. But more than that, it tells an achingly moving story of a son seeking to love and understand not just his father, but also himself.

Juan Thompson begins by outlining his “smart hillbilly” father’s life before his own birth in 1964. HST grew up in Louisville, Kentucky, and after a brief spell in jail as a teenager and a short flirtation with the U.S. Air Force, he embarked on a career in journalism knowing somehow that he was actually going to be a novelist in the vein of Fitzgerald or Hemingway.

And of course he was right—and wrong—because his journalism was equally as impressive as his novels, his unique and powerful style of writing inspiring the now famous “Gonzo journalism” label from a fellow writer.

By the time of his son’s birth, HST and his wife, Sandy, were well versed in the drink and drugs culture. They moved around the U.S. and South America before settling in a “happening” little place called Aspen. It was there they bought Owl Farm in 1968, the home father and son would gravitate to for the rest of HST’s life and beyond. But this geographic stability was no compensation for the horrors of growing up with alcoholic parents and a father who also had an enormous capacity for drugs and gargantuan, unpredictable rages.

The success of his father’s writing did not dampen the vicious fights between his parents, which reached frightening levels of intensity. Witnessing his father inflict the maximum amount of pain he could on his mother made Juan Thompson begin to hate his father. He realized HST was only interested in winning fights regardless of the harm he inflicted. In fact, he seemed to enjoy causing such pain.

Inevitably the marriage failed and during the divorce, Thompson did not see his father for two years. But when he did return to Owl Farm, the relationship between father and son slowly began to stabilize and grow, initially thanks to HST’s live-in girlfriend and later fiancée, Laila Nabulsi.

The small, shy, geeky kid with a bowl cut (who later went on to work in IT) described college as “hell” for him, but by this time he and his father had begun the “long, long road to reconciliation.” Later, again often through others such as his own wife, Thompson was able to grasp indicators of his father’s love. There is a sense that what he has learned has brought him peace.

Despite the agonizing, intimate childhood scenes shared with the reader, this is no “poor little rich kid’s” story. There are many colorful stories of the 13 year old sailing round the Bahamas with HST’s friend, Jimmy Buffet, and the shared, pleasurable duties of cleaning his father’s collection of beloved guns. The period before HST’s death was more tranquil, and as HST struggled with crippling health issues, worsened by his alcoholism, the tenderness between father and son is revealed sometimes in the most unlikely of situations.

A spiritual man, Juan Thompson in his quest has clearly enlightened himself about his relationship with his own son, as much as the one with his father. It has also told him a lot about himself even though he confesses he still does not know what his father really wanted from him. But he knows his father was proud he supported himself and avoided the pitfalls of alcoholism and drugs; he relishes the knowledge that his father was happy when he graduated from college—and later when he married a woman HST respected. He also knows his father needed his forgiveness.

Juan Thompson describes his book as a “memoir.” Thankfully the genre covering this style of book groups “memoirs” alongside biography and autobiography, because both book and author seem uncertain just which category the title falls within.

With acres of orderly filed copies of HST’s letters, notes, photographs, and memorabilia to work with, this is not just an insight into the private world of a great writer, it is a beautifully written letter from a son to a father, and a father to his son.

It was, no doubt, a cathartic experience for Mr. Thompson to write Stories I Tell Myself: Growing Up with Hunter S. Thompson. It is also a humbling journey for the reader to share.