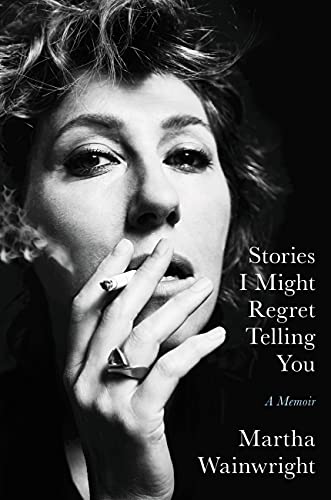 There are celebrity autobiographies that put the author in the best possible light, with every awkward moment surgically excised. Aretha Franklin, for instance hired David Ritz to write an autobiography with her, but she so carefully burnished her image in that volume that Ritz later wrote his own warts-and-all book, which Franklin said was “trashy.”

Martha Wainwright will never be accused of going easy on herself, or on her illustrious family—so much a part of her story. The singer-songwriter’s mother was the late Kate McGarrigle, half of a duo with her sister Anna; her father is Loudon and her brother Rufus Wainwright. There are other performing family members, too—her father had issue with Suzzy Roche, so throw in a bunch of the Roches.

There are strong parallels between this book and Peggy Seeger’s lengthy autobiography, First Time Ever. Both are excellent writers, hard on themselves, and relentlessly focused on immediate family. In Seeger’s case, the focus is so close we barely hear about her half-brother, Pete Seeger. Neither writer takes much notice of current events, or the larger musical scenes in which they were/are engaged.

Wainwright has made seven albums, including a live recording of Edith Piaf songs. She castigates herself—for not working hard enough and sabotaging her opportunities, for being a limited musician, for over-indulging in drugs and alcohol, and for wild behavior (well documented here), and other shortcomings. She’s pretty brutal about her marriage to former producer and collaborator Brad Albetta, although she notes she wants her two kids to think well of him.

Her relationship with brother Rufus is complicated. He’s obviously a huge part of her life and they’re very close, though she felt competitive when he signed a major label contract. An editor should have excised her quoting Rufus as saying she is one of the “best living female singers.” He’s hardly an objective source. Many of Wainwright’s career breaks came through family members. When asked to name the records they’ve been listening to, both Martha and Rufus cite whatever their sibling put out recently.

Despite these things, this is a very good book on many levels, including its brave commitment to full disclosure. She’s unflinching about her father. The one year she spent living with him, when she was 14, turned out very badly.

Loudon Wainwright, one of the world’s great songwriters and raconteurs, was cold and unavailable, and later wrote a song, “I’d Rather be Lonely,” that includes these lines: “I think I need some space/Every day you’re in my face/How can I get rid of you/I’d rather be lonely.” He performed it during a show with her opening and told the audience “it was about me—his daughter—and the year we had lived together. I was shocked and totally offended and embarrassed.” Loudon wrote another song about hitting his young daughter “with all my might.” But he regrets it, and Martha still considers him “perhaps the most underrated songwriter of his generation.”

Mom, too, was a handful, though inspiring. Wainwright portrays her (again, a truly great songwriter, author of “Come a Long Way” and “Talk to Me of Mendocino”) as a good mother on many levels, but also competitive, petty, insecure—and mean sometimes because she’d had to limit her career because of motherhood. In one memorable passage, she tells Martha she lacks interests and is “the definition of mediocrity.” The two end up wrestling on the floor. Many years before, Martha had to be pulled off Anna. Undoubtedly, a play like Ma Rainey’s Black Bottom could be based on a McGarrigle Hour recording session, with what the book describes as “a line of self-absorbed songwriters.” Rufus once told Martha she “would be nothing without him.” But he was drunk at the time.

The result of letting it all hang out is that you get a vividly real picture of Martha Wainwright, her hopes, dreams, dark corners and insecurities. Former boyfriend Dan Bern probably wishes she didn’t write this book. Of course, Wainwright is just as confessional in her songs. Perhaps her biggest hit is “Bloody Mother Fucking Asshole,” a bouncy putdown number with these lyrics: “I will not pretend/I will not put on a smile/I will not say I’m all right for you/When all I wanted was to be good.” She says it’s not about Loudon (he was just the “springboard”). But most Wainwright songs are about other Wainwrights.