The Stop: How the Fight for Good Food Transformed a Community and Inspired a Movement 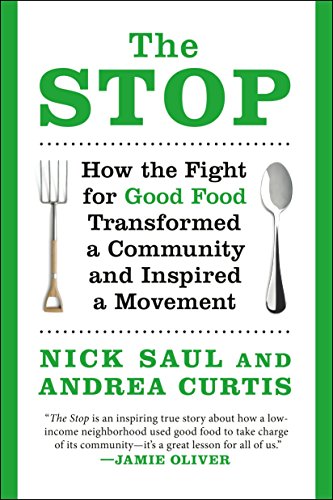 The Stop is Nick Saul and Andrea Curtis’ chronicle of a journey that changed a cramped, mouse-infested food bank into a major center for social change in the city of Toronto. It all began with the realization that the problem of hunger could not be considered in isolation.

The succeeding 15 years inspired a movement that has not only transformed charitable food distribution, but the lives of program participants as well.

There are three distinct parts to this chronology.

First and most interesting is a history of the organization’s development. The narrative style is clear and honest with rich imagery that draws the reader into the place—slimy lettuce and all. Black and white photographs tell their own story.

At the outset, the mission enlarged from merely handing out food to one of involving recipients as contributing members of the organization. The physical environment at The Stop was another of the earliest changes. Coats of paint and a more dignified look replaced the former squalor and long food lines. Mr. Saul stood in his share of food lines as a teenager and vowed to conduct business differently.

Standards for acceptance of donations tightened. Wilted vegetables and industrial marketing failures or expired canned goods were no longer accepted. “Challenging the old charitable handout paradigm had its share of bumps and bruises along the way.” Some of the old loyal volunteers drifted away as administrative systems replaced “seat-of-the-pants” operations.

Residents of the neighborhood began working in newly established gardens that supplemented traditional food hampers with fresh vegetables. Later, people of various cultures and circumstances came together to share a meal when the organization added kitchens and a dining area along with a drop-in café.

Acceptance was challenged in another arena as well. While staff members worked to improve the quality of food, participants raised on cheesy lasagna and frozen pizza were not easily converted. Suggestion boxes filled with comments like “lunch was terrible” when nutritious food was served. Staff and board kept their eyes on the goal of raising the bar nutrition-wise.

After ten years of fundraising and effort, a satellite took shape. A greenhouse “sprouted” at the site of a former streetcar barn in a more gentrified area of the city. This led to farmer’s markets and other entrepreneurial endeavors to create revenue.

In sum, all of these changes were significant, but most important in this process was how the recipients saw themselves. Just how can such perceptions be measured? There are many individuals whose lives changed for the better as a result of belonging to The Stop community. Refugees were no longer isolated; drug and alcohol addicts added meaning and purpose to their existence. A significant percentage of participants reported improved health.

But where is the “proof” in the pudding?

Missing—per admission of the authors—is a solid method for evaluating the benefit to the recipients and the community. Is it enough to consider the number of people per year who benefit from services? Is it possible to quantify individual benefit beyond the satisfaction surveys that are now in place?

Would replication provide validity? As of this writing, two additional Food Centres (sic) were on the drawing board. While The Stop has created a unique model of service the question of evaluation remains unanswered.

A second component of charitable food distribution is political. Here again, the authors are clear and honest about having to make difficult choices, especially when donations come from loyal volunteers.

The work of moving away from the “They should be glad to have it” (read yesterday’s doughnuts or fried chicken) mentality is a significant achievement in moving toward the goal of better nutrition.

Mention was made earlier of corporations unloading experimental failures and salty, starchy food. Placing limits on these gestures is truly a matter of biting the hand that feeds, but it had to be done. The health effects were obvious. Take a look at what is going out of the door at your local food bank. What you find may surprise you.

Relationships get complicated when benefactors and bureaucrats require their funds to be used in a particular way. Over the years, the organization has tried to limit donations with “strings,” yet the collaboration of large donors is essential. The size of an organization drives the need for broadening its network of supporters. This reality is inevitable and will be greater as the bureaucracy of food distribution broadens.

The third component is social policy and activism. “Hunger is a problem that cannot be considered in isolation, (i.e. by simply handing out food). Instead (hunger) is as intimately connected to poverty, inequality, health, the environment and social relationships.”

True, the root causes of poverty cannot be eradicated by food handouts, and it is understandable that Stop personnel would become involve in the fight for fair and just wages and other causes. But where does an organization’s mission find its limits? The writing does tend to get repetitive and “preachy” when dealing with social policy and government involvement. Is “sustained, thoughtful, prevention-focused social and economic policy the answer? If so, who is responsible? There is a certain urgency here that borders on an understandable idealism along with facing the problems on a daily basis.

As Nick Saul moves on to a higher tier in the charitable food network, he can look back on the past 15 years with many successes and other goals as yet in the “work in progress” phase. The Stop has not succeeded in putting itself out of business. Urban gardens can provide only about ten percent of necessary essentials and large scale agriculture must still feed the planet.

Still, his achievements are remarkable. There seems to be no end to his optimism and energy. “I see connections everywhere,” he says, including their latest endeavors to connect local farms with area independent grocers. His passion is contagious, and his network extends nationally and internationally as the fresh food movement gains momentum throughout the world.

In the words of the authors, “Food is never just food.”