Stones into Schools: Promoting Peace with Education in Afghanistan and Pakistan 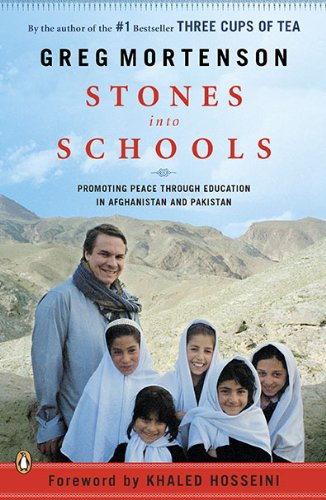 With a little background from his Three Cups of Tea, Greg Mortenson continues his unbelievable saga of his quest to build schools in “the last best place.” He insists on working in areas of Pakistan and Afghanistan that lack schools or that may never build schools because of geographical location, extreme poverty, religious animosity, or war. He believes in starting at the most distant end of the road, even so far as the northeast corner of Afghanistan. His opinion is that the people who live in the last places are the most neglected and the least valued. To receive a school, each village is required to offer free land and labor. Another requirement: girls must equal boys in enrollment.

Working with the Central Asia Institute (CAI), the author travels on impossible roads through perilous mountains to check out the possibilities of building schools in these distant villages. He lives his philosophy that the war cannot be won with rifles nor cruise missiles, but instead with notebooks, pencils, and books. If you educate a boy, you educate an individual. If you educate a girl, you educate a community. Most telling of this idea was when the Taliban recruited young men, the families accepted their ideas of patriotism. If the young man’s mother had been introduced to the values of peace through education, she stood a better chance of preventing her sons from joining the extremists.

Written in the first person, this book exhibits the author’s grace, humility, and patience. His actions reveal his character as he listens with respect and builds relationships with village leaders. Mortenson’s meeting with a leader named Sarfraz and the subsequent development of their relationship turns out to be the beginning of the greatest friendship of his life. Sarfraz is intrigued by Mortenson’s last-place-first approach, which seems to mirror thoughts in his own soul. And both men recognize a spirit that neither understands, but both accept: their relationship rounds out and completes something inside the other.

When Mortenson agrees to build a school in a certain village, it becomes a blood oath. Those who work with him both in the United States and on the other side of the world recognize that time management is not his strong suit. He quits counting the number of missed flights, missed appointments, and overlooked opportunities. But his pledge to build a school cannot be broken, no matter how long it takes, how much money it requires, or how many obstacles have to be overcome.

Sadbar Khan, another villager, shows “Doctor Greg” the effects of the destruction of his village over the course of two wars and indicates the countless rocks strewn everywhere. Sadbar says, “We must turn these stones into schools.” So many of the leaders use figurative language to capture the ideas of the importance of education for all children, especially girls, who historically have been denied the privileges that males have enjoyed in many of these countries and cultures. Stones Into Schools is dedicated to the 120 million children who are deprived of their right of education.

In the process of reading this book, this reviewer learned to attend to the transitions of one scene to another. The author uses the literary device of pointing to the next scene in such a way that it is impossible to stop reading. Some cliffhangers include: “We were about to hire someone who fit the bill . . . our own Indiana Jones.” And “We lacked even the faintest understanding of how swiftly the future was hurtling down upon our heads.” By recreating the drama in these situations of peril and devastation, Mortenson hooks in the reader, making this book impossible to put down.

To quote Khaled Hosseini, author of The Kite Runner and A Thousand Splendid Suns, “If Afghanistan has any chance to become a more prosperous nation, it will require the full engagement of its women.”

With maps, four pages of “who’s who,” photographs, quotations, a glossary, an index, and a lengthy introduction, Greg Mortenson places the reader on the other side of the world and into the lives of the people of Afghanistan and Pakistan.