Stone the Saints: Poems of an Igbo Son 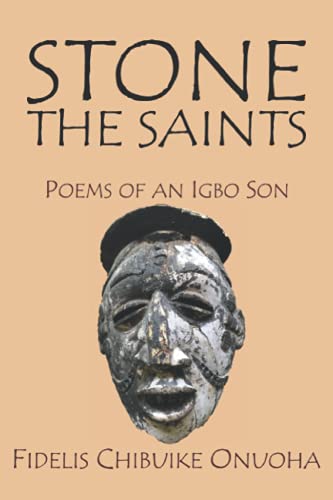 In Stone the Saints: Poems of an Igbo Son, Onuoha does not venture far from traditional literary resources to bring into focus the reality of the Igbo people and their role in the historical events that have shaped his country. Onuoha achieves this cultural and political commentary in poetry with simplicity of language and the vivid images of his beloved land.

At times, the reader needs to visit the generous Igbo glossary at the back of the book to understand a few of the most difficult references (Ndu, Oga, Surugede, Uzoakoli). This asserts a sense of place and underlines Onuoha’s strong identity and attachment to the land. The reader sees the once colorful and beautiful nation, now turned red land, dominated by the brutality of its rulers. The rich imagery brings into focus a crude reality from which we have often turned our eyes away.

The book begins with a sense of nostalgia for lost country of his childhood, “when the grasshoppers had a field day,” “days of live and let live,” “have waved us goodbye.” Now

“Our land is cold and red

moistened by the cold blood of the innocent

whose only crime was being born in this area of the Niger.”

The book resonates with the spaces between what-it-was and what-is-now. Those of us who live in a diaspora, who understand the here-and-there, find in Onuoha collection a reflection of the destruction of our countries. Onuoha knows his roots, but he mourns on the page for the realization that the country of his youth no longer exists. His lives the dangerous reality of protests and political persecution.

The sense of loss carries throughout the entire book alongside a conflicted view of Christianity. One the one hand biblical or iconic references to Christianity pepper poems with a sense of spirituality: “creator,” “Kings of Kings,” “the Eden Garden.” In “Christian Brother!” the poet invites his brothers to

To your anguish he will come to deliver

Purging your land of those haters of Christ

Your crops and life shall be rid of this pest.”

“Stone the Saints,” the title poem of the collection describes the events after the end of the Biafra-Nigeria war. It seems that the war soon faded for the rest of the world, which no longer avoided the horrific image of a vulture waiting for a person to die. But this Igbo son remembers that the end of the war was just the beginning of a different type of horror.

“How could the saints walk away without thought

Of how the worlds would be wrapped in insanity

They took with them the glowing amber of humanity.”

Again, a biblical reference helps to understand the punishment the poet wishes for those responsible for the political unrest and much despair in present day Nigeria.

“If the stones are too light use boulders

Hit them hard until you break their shoulders

The saints must feel the pain we felt

When they left us to the tyrant’s terrorizing belt.”

Later the poet questions Christianity in “Is There No God?”:

“What loving Father abandons his children

In a den to the custody of the Devil?”

To read into this brief poetry collection is to discover the faces of that reality: Onuoha’s parents: a (girl and a teenager boy, recruited as a spy for the occupying forces,) the protesters, the nurses. One of the most striking tribute poems is “If Bravery Was a Statue,” a eulogy to Aisha Yesufu, who stood ground when the SARS forces advanced on her. “I should sculpt you in gold . . . for your hand stood in the air, unafraid of the advancing black pair.” The poet participates in the protests, bearing witness to the pain and suffering of those daring to stand up, fearing for his life, incarcerated for raising his voice.

“I have been there

On those lonely hills of pain

Battered I stood with blood stains

Wailing my heart to the beings of the plain

When I cried and drank of the river I made

While the last hope in the distance I watched fade

I have been there.”

Onuoha exposes police brutality as he sees it happening in Nigeria, at the hands of an anti-riot force called SARS (Acronym for Special Antirobbery Squad). In “SARS,” the poet is clearly an activist in the middle of the battle, recording the protests:

“I will tell you a tale

Of a police unit gone stale

We say no to SARS reform

We know wolves in sheep form.”

The book ends with an exaltation to Africa in general, to rise and speak out, to speak their truth.

“To let them see the color for what it is;

Let them not define your colours as dark as violence.

Tell them violence has no colours.”

It is in this encouragement that Onuoha stands as a new African voice worth all our attention. Stone The Saints: Poems of an Igbo Son is a must-read book that reminds us that what we hold dear may disappear just by the actions of despots.