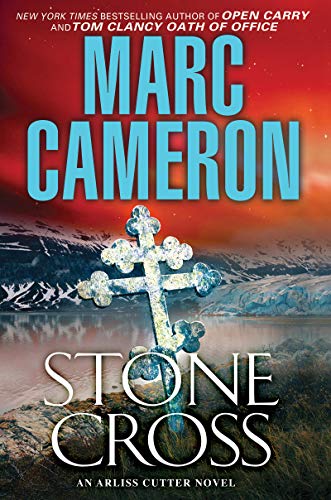 “All this gives the story a nail-biting quality on top of great characterization, a gripping plot, and clean, vivid writing.”

If you want to know what life is like in a remote village in the Alaska bush, read this novel.

If you especially want to know what it’s like to hunt killers and kidnappers in the Alaska bush in winter, read this novel.

Doing anything in the remote Alaska bush is challenging enough. But being a Supervisory Deputy US Marshal on the job in Stone Cross, Alaska, is heroically challenging. Particularly if, like Arliss Cutter, you have Florida-thin blood and must track fugitives through the wilderness in severe weather.

This is Cutter’s second adventure in Marc Cameron’s new series. Like the first volume, Open Carry, this one rips along at the breathless pace of a thriller. Even the pauses are fraught with tension as they build the nightmarish backstory of both villains and victims, and even Arliss himself.

He’s carrying a secret from his past that drives him to be overprotective of the innocent, even when doing so is inappropriate. Thankfully when he does go over the top, that’s usually what’s needed to prevent or resolve bad situations. He’s the guy everyone can rely on to care of a problem (whether they approve of him or not). And, as an instinctive and trained tracker, he always finds what he seeks.

But his intensity (“Along with a Colt Python revolver engraved with the seal of the Florida Marine Patrol, . . . Arliss Cutter inherited his grandfather’s natural aversion to smiling”) and his capacity for violence also make him a little scary and create family and career problems.

The relationship that taxes him most is with his sister-in-law, Mim. His beloved brother and he both wanted the same girl; his brother won her heart, years ago; so Arliss clamped down hard on his feelings out of honor and duty and has been simmering ever since.

But then his brother died tragically, leaving Arliss to help the widow and her three kids carry on. This makes him a de facto father who’s not a dad, a husband who’s not a lover, and a brother who’s wrestling to stifle non-platonic feelings.

Mim, who’s struggling with her own conflicting emotions, undertakes finding out what happened to Arliss to make him so uncomfortably intense, hyperreactive, and remote. She works on this while he’s in Stone Cross ostensibly protecting a judge traveling there to arbitrate a land dispute. But sometime in the past the judge ruled on a case with hurtful consequences, and an unknown person who suffered from that has threatened—in writing—to kill him.

So Arliss and his partner on the Alaska Fugitive Task Force, Deputy US Marshal Lola Teariki, a half Maori fitness zealot, are sent along with the judge on protective duty. They arrive about the time two caretakers from a summer lodge disappear, and the dead body of their groundskeeper is discovered.

At this time of year, the river, which serves as a highway in an area without roads, is entering the seasonal transition of freezing/not freezing and becoming perilously unstable for travel. Worse, suppressive fogs have moved in ahead of a blizzard, which keep vital air transport grounded.

For Arliss and his team, tasked with finding the kidnapped victims and perpetrators with the clock ticking, “. . .  it goes against my grain to walk away from a trail when there’s a killer at the other end of it. . . . it baffles me that we are able to put a man on the moon, but we can’t get a couple of Alaska State Troopers to Stone Cross.”

This is the hard lesson anyone from “outside” needs to learn about interior Alaska. The natural elements rule, and humans are nothing against them.

And thus the environment rules this story. Up against bad guys of all stripes, Arliss and company are ultimately up against nature yet still have to pull off finding, arresting, rescuing, and transporting a variety of criminals and victims, meanwhile staying alive while the both the bad guys and the environment are trying to kill them.

All this gives the story a nail-biting quality on top of great characterization, a gripping plot, and clean, vivid writing.