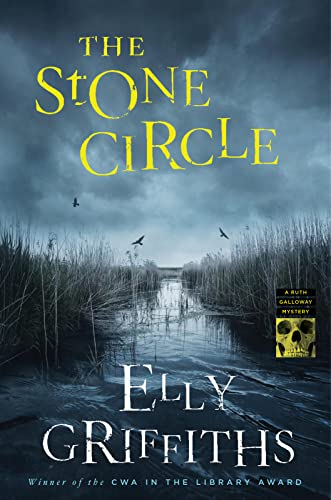 Elly Griffiths’s Ruth Galloway series enters its 11th title with The Stone Circle, featuring the single-parent archaeological specialist and DCI Harry Nelson, who’s been gradually revealed to his family and his community as the father of Ruth’s child. The pair met and had a brief passionate connection that resonated into deeper emotions, but DCI Nelson was, and is, very married, and the chances of his leaving his wife were always slim.

Now an anonymous letter threatens to bring back the violence that once brought Ruth and Nelson together. It looks like it’s written by the criminal they battled—a man who’s quite dead. But if that’s the case, who’s writing the letters that continue to arrive?

While the crime-solving team struggles with what the threats mean, Ruth gets looped into the tension, too, since the letter writer refers to a “stone circle,” one of the prehistoric religious sites in her region. Distracting her from actually tackling the clues is a new factor: Nelson’s wife Michele is about to add a new baby to his life, and Ruth is realistic enough to see that the baby will crush any remaining chance that Nelson would come to her and her daughter. Not that she wants him to. Well, not really. But it would be nice to have him desire to do so, wouldn’t it?

Griffiths spins a complex crime tale that invades multiple levels of time, historic and otherwise. Her greatest strength is the way she sketches, then delicately shade in, the very human nature of investigators and the way their ability to see the relevant strands of clues, motives, and opportunities is shaped by their personal lives. In the long run, one of the crime officers who persists in following her hunches will be the one to turn the case. But with enough warning to actually stop the perpetrator from a new murder? It’s doubtful.

Series fans will appreciate the strong presence in The Stone Circle of Cathbad, a druid and dad, along with his daughter Madeleine, now a journalist with dreams of investigative work herself. But of course the tension ramps up most when the threatening letters begin to rope DCI Nelson and Ruth back together around their daughter Kate and more:

“Nelson’s phone buzzes as he goes up the stairs. He sees ‘Ruth’ on the screen and so waits until he’s in his office to call back.

“As Ruth reads, Nelson can almost feel his blood pressure rising. He remembers the letters arriving when Lucy went missing and then later with Scarlet. The same mocking, erudite, menacing tone. She called from the depths and you answered. It’s the same person, he’s sure of it.”

Because The Stone Circle loops back to Ruth and Nelson’s past, Griffiths provides plenty of backstory for new readers of the series. And the combination of an amateur sleuth who’s a professional investigator of graves, Ruth, with a trained police investigator, Nelson, keeps the pace sharp and quick, the insights clever, and the plot twists highly enjoyable.