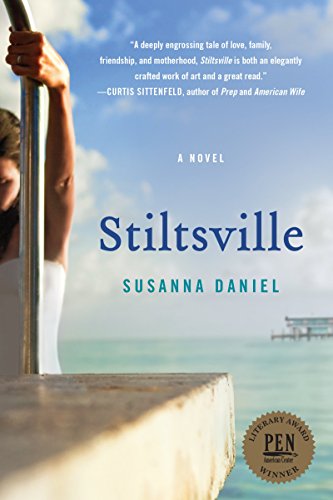 This is a novel that finishes well. That being said, the first half of the novel is a muddy bog. I often felt as if I was reading the diary of an obsessive person who notices every detail but has no idea as to what meaning to attach to the aggregation. Here is a sampling:

“Paul stopped walking and I almost bumped into him. I could see the pink of his skin through the translucent white of his T-shirt, the short hairs on the back of his neck. ‘Look,’ he said, pointing at the water. By his foot, a blue crab skittered across the sand, then slipped underneath a rock. . . . He offered me his hand and I took it, but only until I’d stepped over a wide stretch of coral. We walked for an hour. Paul spoke only to point out a creature or plant, and I spoke only to acknowledge him. The flats surrounded our stilt home on three sides, and I’d never before walked to their far edges. . . .”

This is not quite scintillating reading, and there are 150 or so pages like this before the plotline begins to come together. Stiltsville is the story of a Miami couple and the events that happen to them and their daughter between the years of 1969 and 1993. It seems to take forever to get to the 90s.

The future married couple at the center of this tale initially meet as young college students playing in a community of homes built on pilings in the waters of Biscayne Bay, Florida. The collection of homes is known as Stiltsville. It’s a community that will not last, one of the many things revealed to the reader too soon. Susanna Daniel has the frustrating habit of setting a scene, the events involving the main characters, in current time before skipping forward to tell you what will happen later. For example, her female protagonist’s first impressions of Miami are that, “. . . the city [Miami] seemed large to me . . . though it would double in breadth and height and population during the time I lived there.”

This needless plot device is used far too many times. In one odd instance, the lead character is telling us about today before she jumps to “nearly a year later.” Another time we suddenly shift from today to the events of the preceding day. Later on, we’re reading about what’s happening to the family one evening before we’re abruptly shifted back to the supposedly related events that occurred eight months earlier. All of this is far too clever to be interesting.

There’s also the problem of stilted language in Stiltsville. Early on our female lead tells us that, “. . . after meeting Dennis, I saw in my own future bright, unknowable, possibilities. I’m a bit ashamed to have been a person without much agency in life . . .” Agency? What reader knows a person who would use that word today . . . and in Miami? Her future husband, Dennis, by the way, works for a successful law firm in Miami but seems to know little about law. In one scene, he worries that he’ll be arrested by the Coast Guard for buying a boat from a person who may not have had clear title to it. Any first-year law student would tell him not to worry, but then this is fiction.

Stiltsville also includes some paths that lead nowhere. At one point Daniel includes a thinly disguised take-off on the Rodney King case, except that it’s set in Miami rather than Los Angeles. The reader is meant to get somewhat worked up about riots and the prospect of better communities being invaded before this side-story disappears. It has nothing to do with the main story, so why was it included?

In the latter part of the novel, Daniel does create some quotable statements such as, “The cement of a marriage never dries.” She also displays her cleverness in dropping a near tragedy into our laps before sidestepping it. And finally, there’s the point at which someone is affected by a devastating illness. If Daniel had begun at this point she might have crafted a tight, compelling, and fascinating debut. Instead, Stiltsville exposes us to a writer of some potential who failed to put much of it down on the written page.