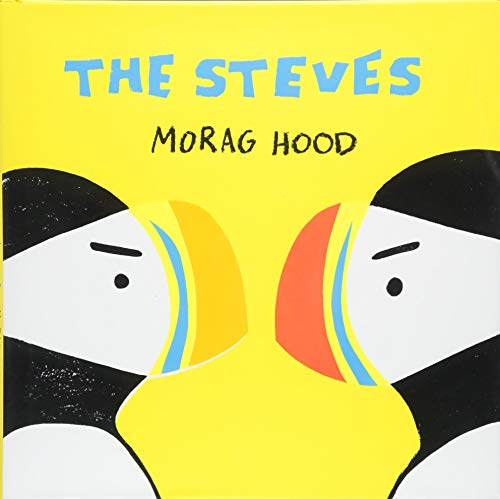 “might prove to be a very handy tool to use with little ones who are fighting with each other.”

If Abbot and Costello wrote very young picture books, they may have penned this one.

It opens with: “Hello, I’m Steve,” said by a puffin to a puffin-twin.

The two almost identical birds argue over who gets to be Steve. The one born first proclaims he’s the greatest, the wisest, the tallest, the Champion of Steves. The Stevest Steve.

And so it is, until the other bird points out: “You’ve got weird feet.”

Now, the dominant puffin becomes “weird feet Steve.” The insults fly until both are hurt enough to apologize and eventually share a bowling ball. (Puffins are bowlers, who knew?)

This simple tale works as a primer for very, very young children to realize that fighting isn’t fun and that everyone is vulnerable. The end tag’s joke is that we meet Steve #3. We are all a version of Steve, Beckett territory for tots.

It’s a message-driven story, handled with some wit and zany drawings by Morag Hood who holds a degree in Costume Design. The bold graphics make this easily digestible and might prove to be a very handy tool to use with little ones who are fighting with each other.