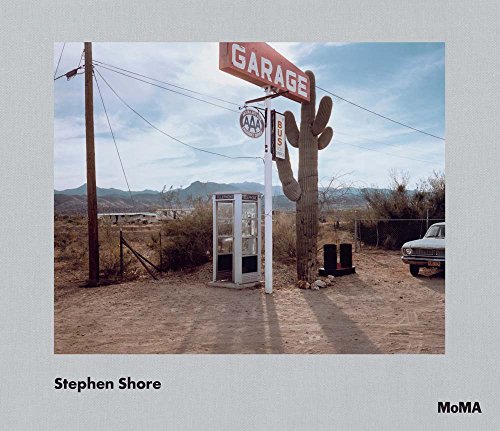 Stephen Shore by Quentin Bajac and published by The Museum of Modern Art is an encyclopedic collection of Shore’s photographic work that spans five decades.

But if you believe that photography should be emotionally involving as in the portraiture of Roger Ballen or Irving Penn, or dramatic as in the landscapes of Ansel Adams, or colorful as in the work of Ernst Haas, or that everyday subject matter should employ color as a visual counterpoint as in the work of William Eggleston, then you will be disappointed. Stephen Shore displays an aesthetic that is drawn to the commonplace and banal, with desaturated color and an overall focus that does not distinguish anything in particular.

While there are some very interesting photographs in the book the approach of including everything-but-the-kitchen-sink—from the most mediocre snapshots to well-crafted images—makes it difficult to be dazzled by Shore’s work. For the most part, it is not compelling, emotionally engaging, or aesthetically outstanding. His work centers around the quotidian, run-of-the-mill scenes, usually with flat or overhead lighting.

Shore’s photography leans heavily toward the conceptual and documentary, which is borne out by his abstinence to reframe or crop his images in post-processing, or alter tonalities in the darkroom, along with his fascination with archeology. When interviewed in 2005 by Frieze magazine and asked what he would be doing if not photography, he responded, “Archeology.”

The book is well written and Bajac does an excellent job of explaining Shore’s work and his conceptual motivations, although it repeatedly jumps back and forth in chronology and in his citing of Shore’s series.

The photographs in the book are grouped into sections according to content or themes, i.e., Black and White, Shop Windows, Signage, Street Photography, Food, etc., rather than chronologically, hence it is difficult to establish any kind of a visual baseline of artistic development—such as when a series from 2012 is followed by one photographed in 1979—unless one goes back and forth through the book repeatedly through non-consecutive decades.

What is admirable in Shore’s approach is his flexibility, as pointed out by Bajac: “The difficulty in grasping Shore’s work as a whole has been heightened by the photographer’s penchant for reinvention . . . taking advantage of new technical possibilities, releasing ever more exhaustive publications of his best known photographs . . . And publishing print-on-demand books devoted to some of his past images. This constant reworking points to a photographer who has never been boxed in by a single approach and considers all of his work, whether current or past, to be alive and in flux.”

As Bajac details in the book, Stephen Shore, whose father was an investment banker, was given a darkroom kit at the age of six by an uncle, and processed the negatives of pictures taken by his parents with a Kodak Brownie Hawkeye. Nearly three years later Stephen was given a Ricoh 35mm rangefinder film camera; one would assume a brilliant precociousness was displayed.

However, for the most part his work in the early 70s is uninspiring, and although some write about his pioneering color work during that period it is worthwhile remembering that Ernst Haas and Pete Turner were already creating remarkable commercial color work at that time. Haas had an exhibition of his color work, titled, Ernst Haas: Color Photography, at the Museum of Modern Art in New York in 1962, which was notably MoMA’s first solo-artist retrospective. In addition, William Eggleston had worked in color since the mid-1960s.

While Bajac makes the case that Shore, “. . . abstains from retouching or reframing showing the same kind of respect Henri Cartier-Bresson did for the shot . . .” and, “there are no heroics in Shore’s images, but rather a poetics of the ordinary and the everyday and a refusal to create an effect for its own sake, echoing Walker Evans’ desire to reveal the ‘deep beauty in things as they are’,” it is also wise to remember that the artist’s perception of things “as they are” is what drove the aesthetics of Ansel Adams and Minor White. To reveal the “deep beauty” does not necessarily mean to be bland or devoid of contrasts.

The book traces the arc of Shore’s work from his earliest photography in the late 1960s to his current endeavors, and his series of Ukraine photographs taken in 2012 are indeed most engaging. Perhaps it has to do with the fact that the subject matter is the country’s Jewish community, specifically survivors of the Holocaust, and may be a subject close to his heart. Shore’s paternal grandfather emigrated from Ukraine to the United States in the late 1800s.

Although beautifully printed on medium weight non-glossy stock, the book’s expert color reproduction is hampered by its layout where all of the images are relatively small on the page, typically 7.5 by 6 inches centered on a 10 by 9 inch page. With an outstanding number often being half that size, it leaves much to be desired.