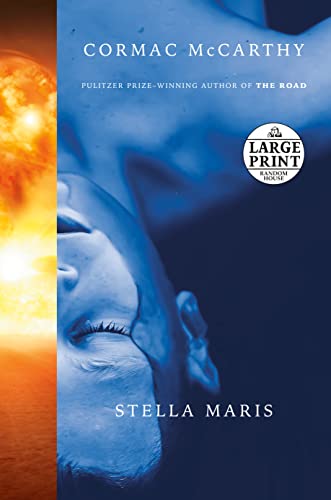 Perhaps you need to read Cormac McCarthy’s The Passenger to fully enjoy Stella Maris. But in the belief that each book, even those in a series, must stand on its own merits, one could expect a compelling story from Stella Maris even without having read anything else by McCarthy. Alas, that is not what this book delivers. Despite the many rave reviews, some readers may find it disappointing from start to finish.

The narrative is presented as a series of sessions with a psychologically disturbed young woman, Alicia, a brilliant mathematician who seems to have suffered a psychotic break, and her therapist at the mental institution where she sought care (the Stella Maris of the title). The therapist is either incompetent or simply unrealistically depicted. Either way, his questions often seem distracted or random or more about his own interests than his patient’s. He asks repeatedly about Alicia’s father, a physicist who worked on the Manhattan Project in Los Alamos. These questions reveal more about the therapist’s judgement on scientific responsibility and guilt than on any issues the patient may have.

“’Do you think about sex?’
‘Yes. Don’t you?’
‘Well. I have a certain history where the subject is concerned. But sometimes I forget that I’m talking to someone for whom the imaginary has a special place. Did Romania become less appealing as it became more real?’”

So is the subject sex, or the imaginary supplanting the real, or Romania, wherever that topic is supposed to lead? What is the therapist trying to get at here?

Alicia is a child prodigy, going to college as a young teen, and clearly her brilliance is part of what caused her imbalance:

“Mathematics is just sweat and toil. I wish it were romantic. It isn’t. At its worst there are audible suggestions. It’s hard to keep up. You don’t dare sleep and you may have been up for two days but that’s too bad. You find yourself making a decision and finding two more decisions waiting and then four and then eight. You have to force yourself to just stop and go back. Begin again. You’re not seeking beauty, you’re seeking simplicity. The beauty comes later. After you’ve made a wreck of yourself.”

This wreck, however, isn’t healed through the sessions. It’s not even deeply explored. But then, nothing is looked at carefully the way one might expect. We’re told Alicia is Jewish so that the author can throw in some random remarks about antisemitism, but her Jewishness seems beside the point, so why include it at all? Perhaps it could have given her father’s work on the atomic bomb a moral imperative since the work was done to defeat Nazi Germany, not Japan. But that’s never suggested. In fact the entire background of the atomic work is simplified to almost a caricature. This is a subject rich in moral, philosophical, and scientific complexity, but in this book, it’s a one-note burden of guilt and blame.

This is a book for die-hard Cormac McCarthy fans. Anyone else may find themselves searching for something more interesting to read.