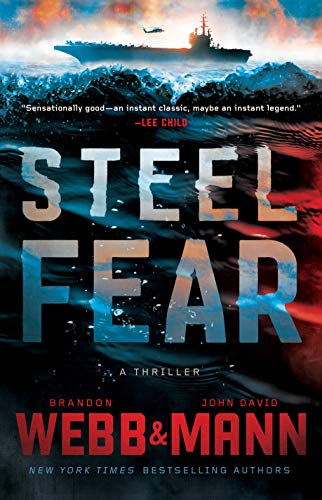 “The team of Webb and Mann is a welcome addition to the world of military thrillers, and Steel Fear is an excellent beginning.”

When enigmatic Navy SEAL sniper Finn (no last name) helicopters on board the aircraft carrier USS Abraham Lincoln in the Persian Gulf after a failed mission in Yemen, he finds himself dropped into a very bad situation.

Morale is low, leadership is weak, and suicides have started to spike among the crew. But are they actually suicides, or is a serial killer on board, systematically picking off his victims?

As the most recent arrival, Finn draws more than his share of suspicion, particularly because of his odd and inexplicable behavior. He constantly roams the ship as though conducting reconnaissance (he is), he questions crew members about seemingly trivial things, and he spends a lot of time on deck sketching images that appear to be drawn from deep within his subconscious.

Not to mention the recurrent blackouts and his inability to understand why he’s being shipped home under a dark cloud of disgrace.

Is Finn actually responsible for what’s happening, and he just doesn’t realize it? Or is a deranged killer loose on one of the world’s most powerful warships?

Steel Fear is the first military thriller written by Brandon Webb and John David Mann. They’ve previously collaborated on seven nonfiction books drawing on Webb’s experience as a Navy SEAL sniper, and instructor, including The Red Circle: My Life in the Navy SEAL Sniper Corps and How I Trained America’s Deadliest Marksmen (2012) and The Killing School: Inside the World’s Deadliest Sniper Program (2017).

While Webb is the subject matter expert for this novel (having also served a tour on an aircraft carrier that experienced a series of mysterious crimes), Mann is the more accomplished writer of the pair, having co-authored more than 30 books, including four New York Times bestsellers.

They make a good team, and their first venture into fiction is a successful one.

While they move their point of view around among several characters, including helicopter pilot Lieutenant Monica Halsey and Command Master Chief Robbie Jackson, the focus remains on Finn. His initial entrance into the story, seen through the eyes of Halsey, is both amusing and effective:

“Even from a hundred feet off she had zero trouble identifying the SEAL. He was tall, muscular, powerful . . . Perfect specimen. Asshole.”

Behind the SEAL, apparently carrying his bags, is another, unimpressive man:

“This little guy was totally eclipsed by the SEAL, not just a head shorter but almost a different species: thin wiry limbs, knobby joints, oversize eyes . . . The contrast was almost comical.”

Problem is, the little guy is Chief Finn, accomplished Navy SEAL sniper, and the perfect specimen is his bag carrier, destined never to reappear in the story.

The mystery Webb and Mann create around Finn through his lack of a surname, his eccentric behavior, and his troubling blackouts effectively complements the broader mystery of the serial murders. He’s a character we’ll look forward to seeing more of in the future.

Their secondary characters are also fairly well drawn. Although it was completely gratuitous to have begun the novel with Halsey naked in front of her mirror, setting a tone right up front the authors surely did not want, their characters are surprisingly rounder than what one often finds in military thrillers, especially in debut efforts. Because they have many aspects to their personality to consider, the suspect pool remains pretty wide throughout the novel.

The setting is also very well managed. The aircraft carrier is an appropriately claustrophobic and confusing environment for a murder mystery, a maze of decks and passageways that “splintered off in all directions with no discernable logic, like the back alleyways of a medieval town.” And with 6,000 people on board, potential victims and suspects might suddenly loom in front of us at any moment.

Although the pace lags a bit in spots and a few of the shifts in point of view appear unnecessary and distracting, the team of Webb and Mann is a welcome addition to the world of military thrillers, and Steel Fear is an excellent beginning.