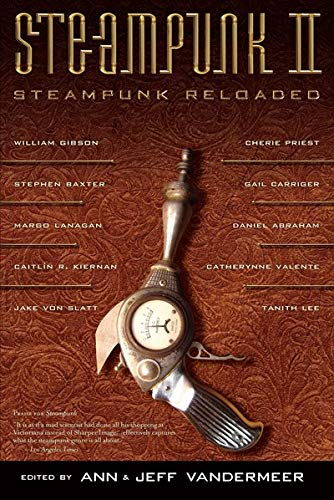 Steampunk is a genre for thinkers, and this book proves the point. The stories inside are beautiful, often lyrical, frequently disturbing, always exciting, and occasionally even funny, but they’re also dense, literary, and trusting of the reader to be smart enough to “get” it.

Each story offers up a new and distinct world to explore—as they should be in a good anthology—and these are amazing, weird, and wonderful worlds. Better yet, they show the wide range of styles and applications that comprise Steampunk, from William Gibson’s modern-day “The Gernsback Continuum,” and Samantha Henderson’s beautiful fairytale-meets-now-meets-steam “Wild Copper,” all the way to Marc Laidlaw’s highly Victorian “Great Breakthroughs in Darkness” that’s almost a Lovecraftian take on the genre, and the Sherlock Holmes-ian “Balfour and Meriweather in the Adventure of the Emperor’s Vengeance.”

Almost every entry in Steampunk II—and there are more than just stories here—is amazing, and each in a totally different way. Shweta Narayan’s “The Mechanical Aviary of Emperor Jalal-ud-din Muhammed Akbar” is a dazzling bit of ancient mythology concerning mechanical people and the lessons we can learn from them. Catherynne M. Valente’s “The Anachronist’s Cookbook” is a startling and stirring call to arms against many problems inherent in Victorian society. Vilhelm Bergsoe’s “Flying Fish (Prometheus)” is an actual story from the time of Verne, from the period that Steampunk tries so brilliantly to rewrite, translated here for the first time in English. Margaret Ronald’s “A Serpent in the Gears” is a snippet of a world of adventure, strangeness, and wild characters that are worth revisiting over and over.

The Introduction explains what Steampunk is and where it comes from, and maps out the assumptions that it helps to know before starting in on the stories. And then at the end, there are several perfect essays about what Steampunk means in the cultural zeitgeist.

If you’re new to the genre, Steampunk II is perhaps a little dense and alien. If you are familiar with the genre, this is a wonderful addition to any collection—rich and varied enough to continually offer new ideas, new takes on oldies but goodies, and intense excitement and adventure in myriad styles. The book feels fresh, new, and at the same time, like it should have been actually produced at the time it’s set in. It almost hearkens back to the classic SF of the 1950s, as well as its intended Victorian roots, in the sense that all these characters prove that anything is possible and that people are smart and resourceful.

The VanderMeers have presented a wonderful and involving collection in Steampunk II. Here’s holding my breath for III.