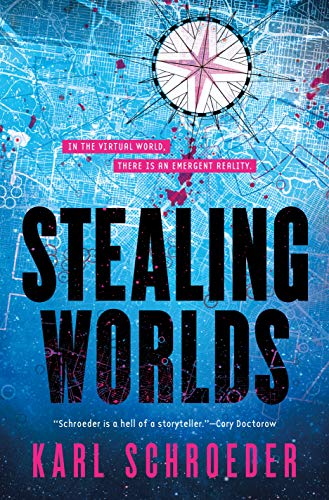 Stealing Worlds is not so much a story as a manifesto for a new, technology-based economic system. Readers without a basic understanding of Internet security, cryptocurrency, and virtual gaming may find themselves left behind as Schroeder riffs on those concepts and paints a picture of how the future might look as they advance.

By chapter four, characters are embedding circuits under their skin that “maintain a position-based ID that’s tracked on a public blockchain” without much explanation of terms. The rest of the book builds on this beginning to a conclusion in which Schroeder’s economic system is the salvation of our otherwise crumbling civilization.

The initial premise feels familiar enough: Sura Neelin is on the run from shadowy corporate entities because her father entrusted her with the proof of a conspiracy before he died. Before long, however, Sura is hiding in complex layers of virtual games, played through glasses that turn real places and people into fanciful ones. These games have their own economy, based on cryptocurrency and value returned for services rendered. A large percentage of the book is filled with characters talking about how this system, when scaled out, can solve the world’s economic problems.

The heart of the concept is the idea that real world objects or people can be scanned into a computer and assigned a unique and impossible-to-copy key to represent them in the game worlds. One example given in the book is a crumpled Coke can. If the can is scanned and given its unique key, then it exists in the digital world. The can could look like a wallet or a pinwheel or anything else in the game, but it would still be linked to that exact real world Coke can. If, in the game, someone put cryptocurrency into it, then suddenly the crumpled Coke can in real life has real value, because it's the only way to get at the money in the game.

Schroeder spends a great deal of time and character dialogue expanding this concept into an alternate economic system that he claims is neither capitalism or communism but something new and better. Certainly in the context of the novel, this is true: The world's economy collapses, and this game economy is the only viable system left. By the end of the book, there is healthcare for all, the poor are provided for, threatened ecologies are protected, climate change is reversed, employment is high, and wealth and plenty abound.

Although the “shadowy government conspiracy” plot is hardly unique, Schroeder uses it to drive an exciting plot with multiple unexpected twists. The characters are dynamic and well-drawn, including a bounty hunter who tracks down people through their digital footprint, a mentally damaged young woman who copes with life by constantly playing characters in virtual games, and a billionaire businessman driven to prove he succeeded through skill, not luck. Schroeder's descriptions of both real and virtual worlds are detailed and compelling.

However, the series of epiphanies that lead to the utopia at the end of the book only work if the reader has both understood and bought into the economic model Schroeder has gone to such great lengths to explain. Like any novel which promotes a particular religious, political, or economic perspective, the conclusion is only satisfying for those who find the worldview credible and the end state desirable.