Stealing Secrets: How a Few Daring Women Deceived Generals, Impacted Battles, and Altered the Course of the Civil War 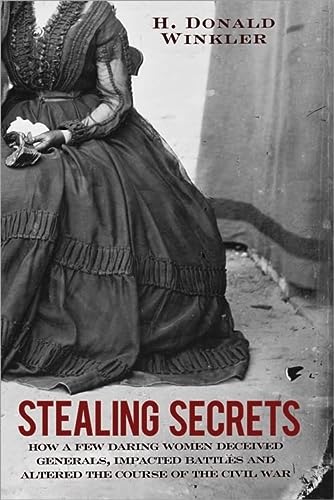 H. Donald Winkler has researched the lives of nineteen daring women who changed the outcome of Civil War battles. Some were spies for the North, others for the South, but all were passionately committed to the cause they believed in. They took enormous risks and were often successful in missions that men could not have accomplished.

Researching subversive activities during the Civil War was often complicated by lack of records, inability to access records, and lack of trust as to the truth of records. Winkler made every effort to provide accurate information by using primary sources such as memoirs, journals, letters, and newspaper articles to write these women’s unbelievable stories. In his view, these intrepid women were quick-witted and capable of deceiving others.

The widow that President James Buchanan visited once a week lived only four blocks from the White House. She was described as “a woman of almost irresistible seductive powers.” When the Civil War began, old-time Southerners moved out of Washington, but Rose Greenbow stayed and became the “Rebel Queen of Washington Spies.” Although in her mid-forties, Rose used her sensuality to create the largest network of spies that operated during the Civil War.

Confederates won the battle of First Manassas thanks to coded messages Rose sent to the commanding general. Eventually she appeared before a commission that sentenced her to be exiled to the Confederacy. In an effort to run the blockade weighed down by gold fastened around her waist, the ship met with rough water. She insisted on a lifeboat, but when it sank, she drowned.

Every school child knows Harriet Tubman. Do they know about her friendship and collaboration with John Brown, Harper’s Ferry abolitionist? As a civilian and a woman she was attached to the Union Army to work secretly to recruit black scouts. When a Boston newspaper identified and praised her work as a spy, she was exposed and her treasonable activities were over. Although she received many honors, she died frail and penniless at the age of 92.

Emma Edmonds’ mother feared her daughter would die violently because she insisted on climbing the tallest trees, riding the most difficult horses and swimming flooded rivers. Emma’s strong body and shooting skills stood her in good stead when she enlisted in the Confederate Army as Frank Thompson.

Many more female spies in Stealing Secrets entice the reader: Belle Boyd, who had her way with young soldiers; Mary Surratt, the only woman spy executed; Loreta Velazquez, hired in disguise to find herself. Selected sources beckon the reader to research further. Rare, historic photographs helped the author get to know the women he wrote about. The reader will buy into the fact that truth is stranger than fiction.