Stay: A History of Suicide and the Philosophies Against It 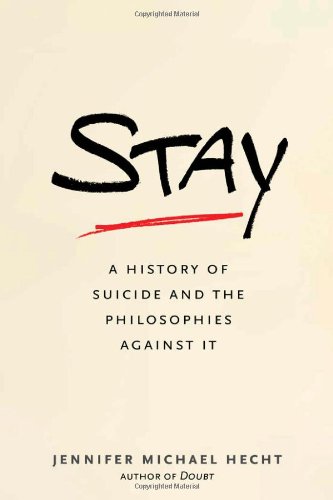 “As a suicide attempt survivor, I found this book most enlightening.”

There are a number of subjects that are taboo in “polite company:” sex and politics top the list. Jennifer Michael Hecht tackles a third topic: suicide.

Stay is a comprehensive history of the philosophical arguments for and against suicide. From the story of Socrates and the Stoics to Rome’s Lucretius and Cato, Hume and Voltaire through the modern era, Hecht examines the arguments not just for life but for death as well. This is a well-balanced discussion of history and philosophy, of the sectarian and secular arguments for and against “self-murder,” along with her personal notations moving toward persuasion that we will be better off if we just stay.

Though we begin our reading with the Greek and Roman stories of suicide, I found my interest drawn to the second chapter “Religion Rejects Suicide.” It is the religious question that is placed up front quoting St. Augustine’s “City of God” in which he declares that suicide is “a ‘detestable and damnable sin.’” In fact, we learn that the reason is simply God’s commandment, “Thou shall not kill.”

Hecht does, in fact, question whether the Scriptures actually condemn suicide from stories of Samson’s death at his own hands to Christian martyrs and the death of Jesus of Nazareth and Judas—all may be considered suicides.

Though Hecht spends this chapter on the religious aspects and condemnation of suicide, the majority of the book concerns the secular arguments both for the right to self-determination and death, and those who argue to “stay.”

We all know Shakespeare’s Hamlet and the soliloquy “To be or not to be, That is the question,” but Hecht suggests that this is a self-discussion of life versus death and if one should take his own life because of the “heart-ache and the thousand natural shocks.” The discussion of Hamlet becomes a prime example of the time and insight proffered in this book.

Hecht explains, “(Hamlet) is not just asking whether he is too tired and miserable to go on, and he dismisses the question of whether he has something to live for after all . . . What he asks is: which is more noble, which is more sensible?”

Life or death? To be or not to be? This discussion continues, not invoking just Hamlet’s desire to die, but his deep desire to live as well.

In fact, Hecht tells us that Shakespeare used other plays in his attempt to write against suicide. In the play Cymbeline, Imogen questions her own attempt and wanting to die. Shakespeare wrote, “Against self-slaughter, There is a prohibition so divine, That cravens my weak hand.” In other words, the proclamation that God prohibits suicide is clearly put forth.

It is the writing of the Enlightenment that brings the secular views of suicide into play. Hecht argues that most of the writings support of self-determination and justification for suicide were really arguments against the church are well documented. Starting with Thomas Creech’s own suicide after he translated Lucretius believing that suicide was in fact a positive choice, we learn that his argument is really opposition to the Church’s position condemning the act and is the basis of much of the argument in support of the self-determination and taking of one’s own life.

Here is where the ancient stories of suicide, modern religion, and secular humanism collide in a magnificent fashion. The reader is asked several times in the readings if Jesus of Nazareth’s death was a type of suicide, if the death of Christian martyrs and those who die in battle is not indeed a form of suicide. We read the writings of the reformation and the Enlightenment showing both side of the “to be or not to be” argument fairly though with the bias as indicated in the subtitle of the book.

Hecht’s writing also takes us through the misconceptions of suicide and the position taken by the nonreligious, atheists, humanists, and freethinkers. We learn that though there are some who advocate the right of the individual to decide whether or not to take his or her own life, the vast majority of modern secular philosophers believe that we individually have an obligation to our family, friends, cohorts and community, that one’s death be it of his or her own hands tides over the society as a whole.

Yet it is the discussion of suicide contagion that is most fascinating: why there are clusters of suicides following the first and the reasons. Hecht takes time to refer to Frank J. Zenere’s 2009 work, Suicide Cluster and Contagion, to shed a much needed scientific light on the topic, that the “proximity” to a suicide can predict others who may attempt the same route.

As we continue through the historical and philosophical review, we find that Hecht is almost one minded as to her forgone conclusion. This is especially true in the second half of her work where she writes,

“We as society do very little to save the lives of people suffering and contemplating suicide. Isn’t it time for us to try a little harder to save these lives? To save our own lives?”

What is not discussed are the psychology and philosophy concerning the murder-suicide or “right to die” issues, such as signing a “Do not resuscitate” order or having the means of ending one’s own life available for the terminally ill. These are two issues that remain prominent in our mind as both remain in the news.

As a suicide attempt survivor, I found this book most enlightening. It provided me with a platform on why not to attempt to take my own life again. Hecht’s approach to attach the survivor with society is quite powerful. She has accomplished what she sets out to do from page one: to convince the person contemplating suicide to “consider the arguments (for not taking one’s own life) and choose to stay. After that, anything can happen. First, choose to stay.”