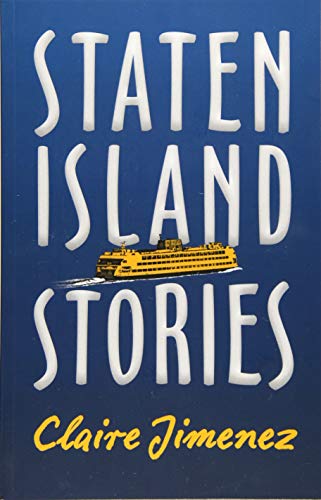 “Staten Island Stories concerns ugly times and circumstances, but the people and the stories are beautiful.”

Staten Island Stories introduces a distinctive new author, Claire Jimenez. Her collection features an often overlooked New York City borough and its minority working class population. The characters reside on Staten Island, but are linked to each other—as are the stories—by much more than just geographic adjacency. These stories are deeply grounded in a particular place and community but will resonate with readers everywhere.

Jimenez, a long-time Staten Island resident herself and a PhD candidate in English literature, says her collection was inspired by Geoffrey Chaucer’s The Canterbury Tales. His pilgrims traveled a shared path to the shrine of Canterbury Cathedral, in hope of having prayers answered.

Jimenez’s vulnerable, struggling modern-day characters are urban pilgrims and aspirants. Not heading for a shrine, these Staten Islanders are trying to get to work and school on time, to get home safely. The travelers undertake shared journeys every day, often to Manhattan, always on public transportation: bus, ferry, subway. They are trying to make the rent, to care for families, to find love, to have some fun. Unlike Chaucer’s pilgrims, here doubt is more common than belief. One character remarks that it’s hard to figure “out the trick to talking to god . . . it was like I was texting god and he wasn’t returning my phone calls.”

These characters, like Chaucer’s, speak in idiomatic, colloquial voices. Some are children, some teenagers, some young adults. Jimenez, who grew up speaking first English and then Spanish, handles language with nuance, and highlights the complexities navigated by children and youth living in two languages and two cultures. Her prose, especially the dialogue, snaps with authentic immediacy. Ten of these striking stories are told in first person. Two outstanding ones are different.

Jimenez captures the way individuals sometimes speak and act with the thoughtless unison of a  herd. “This one kid, Douglass, got jumped at the terminal by the S74 ramp by some kids who teased him in computer class: tenth grader Ryan Rodriguez, white Allen (not the Spanish one), and Christopher Andrews, who used to be good until his brother got locked up. If anybody asks who jumped him, we didn’t tell you, though.”

Jimenez takes on another point of view challenge in “Do Now” and employs second-person narration. This choice pulls the reader deep into the story, inside the mind of the protagonist, a struggling new school teacher in conflict with her critical principal. “You try to redirect your emotions by focusing your gaze on something neutral and calming: the marble floor, the desk, a red ceramic mug. But ultimately you’ll think of your mother lying in bed, hands extending into the air as if she were a small child begging to be lifted from her crib.”

This collection is dark, sometimes harrowing and bleak. But fortunately for the reader, another attribute Jimenez shares with Chaucer is a talent for recognizing the humor that sometimes surfaces in grim situations. She never trivializes nor sentimentalizes but her sharp ear and eye for the comedic balance the tone of the collection. Many of these Staten Islanders know how to use laughter to survive and wield wit as a weapon.

Jimenez’s commuters seek jobs, homes, friendship, and love. Fighting for respect and justice, they press on through  difficult days. Their urban pilgrimage is an uphill struggle against racism, prejudice, and poverty. Despite difficulty and suffering, many hold on to hope, friendship, and family. As one character says to his wife, “Accept it, Jul. Sometimes, people are not as ugly as you think.” Staten Island Stories concerns ugly times and circumstances, but the people and the stories are beautiful.

Ellen Prentiss Campbell’s novel Frieda’s Song was published in May 2021. Known By Heart: Collected Stories, appeared May 2020. Her debut novel, The Bowl with Gold Seams received the Indy Excellence Award for Historical Fiction; Contents Under Pressure: Collected Stories was nominated for The National Book Award. Her short fiction has been recognized by The Pushcart Press. An essayist and reviewer, Ms. Campbell is at work on a new novel.