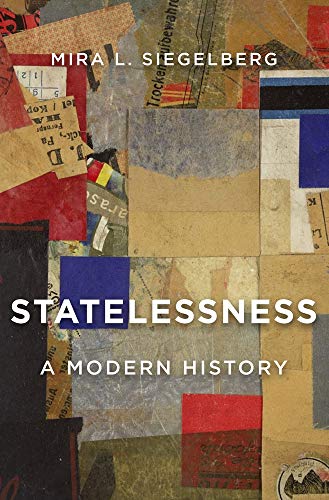 “Today’s nation-states are increasingly driven by nationalist-cultural concerns that result in exclusionary logics. They tragically do so at the very moment when global geopolitics, climate crisis, and other forces will increasingly dislodge people who are likely to become permanently displaced in an existential netherworld. The implications of this are truly staggering and dystopian.”

Mira Siegelberg provides a fine-grained history of statelessness from an institutionalist perspective. That is, she is concerned with how nation-states, emergent transnational institutions, and legal and socio-cultural theorists have conceptualized and dealt with displaced people through a variety of formal-legal and cultural-personality lenses. Early on she underscores how the modern nation-state is a remarkably new invention. It really came into its own as a form of governance post-World War I and then greatly expanded in the post-World War II era as western powers divested themselves of their colonies. She further traces statelessness, as a modern mass phenomenon, to WWI.

It is important to note up front that the categories of stateless and refugee are distinct cultural constructions with their own legal, moral, and pragmatic distinctions as defined by the institutions that have wrestled with this phenomenon.

Ironically, prior to WWI, individuals could easily move around Europe and even renounce their national citizenship and become free agents without citizenship. Strategically this allowed people to duck the obligations of their previous home country (e.g., military service, taxes, and other burdens imposed by nation-states).

WWI changed that and suddenly nationality mattered, and nation-states had the legal authority to determine who was included or excluded. Yet statelessness conferred a particularly knotty problem for nation-states, for it is a liminal status at odds with dominant governance logic and law. If statelessness were to be legally recognized, then the moral and legal authority of the sovereign nation-state concerning membership and accountability to its laws falls into serious question. Is sovereignty a condition within the individual or does it only exist with a larger, collective political entity? In the abstract it might be the former, but in practice it is the latter. In the post-WWI period, the challenge of statelessness was largely framed in formal-legal terms.

Being stateless, clearly, did not automatically confer citizenship in a new host country, as Siegelberg points out. Indeed, she notes that in B. Traven’s The Death Ship, a stateless protagonist is aboard an ancient freighter so abused and exploited by its capitalist owners that it is doomed to sink when its over-taxed boiler is sure to explode. There is no friendly port for the stateless protagonist who, like the freighter, is simply the detritus of the industrial-capitalist world order. In a final ironic twist, the ship’s owners will collect the insurance when it inevitably goes down.

With the collapse of the old empires in the post-WWI era, statelessness became a chronic, mass problem. The League of Nations emerged as a major intergovernmental peace organization designed to adjudicate conflict before they erupted into warfare. Part of this role included dealing with the plight of stateless. Indeed, post-WWI saw a flourishing of debate about the role of international law and the state in addressing the predicament of the displaced.

As WWII approached, between 1933 and 1939 1.2 million people fled their home countries (e.g., Jews leaving Germany; the violence of the Spanish Civil War; the Japanese incursion into China). But it was WWII that catalyzed much of the modern thought about statelessness and its mediation.

Siegelberg turns to the work of Hannah Arendt whose post-war critique of the state and internationalism still resonates deeply today. Arendt saw nation-states as exploitative and expansive. Internationalist attempts to protect human rights were, at best, tepid, offering little to no protection for the displaced. The answer was a unified world system governed by international law, the universal right to hospitality in Kantian terms. It is not surprising, then, that both the United Nations (UN) and the International Court of Justice at the Hague were formed in 1945 as broadly global attempts at securing justice and basic human rights, as well as protecting the unprotected when states and the rule of law fail them.

Arendt’s universalist approach to the “right to have rights” is the equivalent of a right to enter and come under the sovereign domain of a nation-state, and, thus, be subject to basic human rights (safety, dignity, and security).

However, as Siegelberg underscores, the post-WWII era takes a turn away from an abstract right to nationality toward a conceptualization infused with culture and personality. If states seek to exclude, then this is the logical entailment of those kinds of practices. As Arendt and others would unambiguously understand, this plays to nationalist biases.

How then have international organizations, such as the UN, provided a counterbalance to an increasingly nationalist-cultural orientation when it comes to the stateless? Of course, the answer is that the UN’s efforts have revealed the power and resilience of the nation-state model for regulating human movement, inclusion, and exclusion.

It is worth pointing out that the notion of statelessness implies the state, as if that were the only modern governance possibility. The international relations (IR) literature is replete with language that stumbles uncomfortably around non-state systems of governance and authority: geopolitical anomalies, failed/failing state, ungoverned zones; permissive environments, anti-establishment entities, shadow governments, multi-polarity and loose networks. IR is so stuck on the state that it lacks a language and set of analytical tools for conceptualizing and engaging other political configurations.

It would be a mistake, then, to overemphasize the power and resilience of the nation-state if we look at the longue durée. A relative handful of modern nation-states existed at the outset of WWI and slowly expanded. Indeed, the greatest surge of new nation-states occurred as former colonies gained independence in the 1950s through the 1970s. While western states have a robust, permanent feel, none has truly deep historical roots. Indeed, most modern states are, indeed, fragile experiments. An archaeological portrait would tell us that states emerge, run their course, and collapse. Permanence is an illusion.

Taken a step further, it might be argued that the nation-state is in the minority of governance possibilities. Nation-states often have competing governance systems within their boundaries. Cartels in Mexico have little use for the state other than to carry out activities they are not interested in undertaking. “Ungoverned zones” in places like Pakistan are actually governed, just not by the state or actors they like very much. Groups, such as ISIS, have no use at all for nation-states, their boundaries, or their rules.

We are surrounded by states that have lost physical control of their territory; their ability to make legitimate collective decision; are unable to provide reasonable public services, infrastructure, and security; are unable to interact with others in the international community. That is, many states are tenuous and subject to contestation that threatens to subvert or co-opt them.

Today’s nation-states are increasingly driven by nationalist-cultural concerns that result in exclusionary logics. They tragically do so at the very moment when global geopolitics, climate crisis, and other forces will increasingly dislodge people who are likely to become permanently displaced in an existential netherworld. The implications of this are truly staggering and dystopian.