The State of Israel vs. the Jews 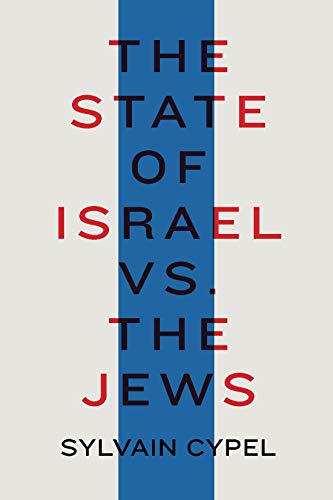 Sylvain Cypel argues forcefully for the moral bankruptcy of Israel in its treatment of Palestinians. He has marshalled many sources, quotes many people, but the book never rises above the level of a diatribe because there is not a single instance of presenting any information that doesn’t gibe with his viewpoint. This lack makes the book not a reasoned study, but a polemical screed. Cypel may make good points, but it’s hard to take him seriously when he glosses over major issues with barely a mention. Anyone hoping for an illuminating overview of Israeli policy and social attitudes will be disappointed. Cypel has an ax to grind, and he comes out swinging from the first pages.

“Let’s take stock of the situation. We are no longer in a period of major confrontations. The Second Intifada ended more than fifteen years ago in a stinging Palestinian defeat.”

So the conflicts of 2008, 2012, 2014 when Hamas rained rockets on Israel don’t rise to the level of “major”? They would for any other country. This lack of even recent history makes Cypel’s arguments deeply problematic. Worse, the book has no broad history or context of any kind. What about the period after the 1973 war, when there was ease of movement from the territories into Israel? This all changed in 1987 with the rise of Hamas and the wave of suicide attacks on Israelis as they ate at restaurants, rode the bus, or walked the streets. It’s hard to imagine a country not responding to such violence. Shutting off the territories seems like a less brutal solution than the kinds we’ve seen in Myanmar and Ethiopia.

There is not a single mention of Hamas’ violence toward the people they’re supposed to govern, not a word about their policy of launching rockets from schools and hospitals so that any Israeli response becomes a huge PR win for Hamas. And naturally there is no mention of Egypt and their actions on the other side of the Gaza strip, just as punitive (if not more so) than the Israelis.

In fact, the history of Jews having been kicked out of Iraq, Morocco, Egypt, Iran, all over the Middle East at roughly the same time the Palestinians lost their homes is erased. Yes, the Palestinians are suffering but there is not a single review of their political choices, their miserable treatment by other Arab countries (kept in squalid refugee camps in Lebanon, barred from positions in Jordan). Just as today, the Arab countries see the Syrian refugees as “lesser,” the Palestinians earned the same icy welcome. But Arab abuse of other Arabs is not a subject for criticism. Not in the general media and certainly not in this book.

It’s no surprise that given the one-sided nature of his narrative, Cypel follows the liberal direction of many on the left: “In Israel, calling the situation in the Occupied Territories ‘apartheid’ isn’t new . . . And don’t tell me that the Palestinians exercise their own power in Zone A!” Actually, he should be told that. There are plenty of reasons to criticize Israeli policy toward the territories, but labeling it apartheid reveals a deep lack of understanding of what that term means. It’s a dog whistle to enjoin social justice allies, one that has works all too well. That doesn’t make it accurate or meaningful, just the opposite.

Cypel criticizes President Trump and his demagogic polarization of the American public early in the book, but he is doing the same thing here, trying to set up an “us” and “them.” “Us” means the good Jews, the ones who don’t support Israel, “them” those Jews who do. He does this while cloaking himself in social virtue, serving up sizzling stories to stoke his base, the people who already agree with him. This sanctimoniousness adds an oily layer to an already disappointing book, lacking in intellectual, historical, and political rigor.