Stars of Fortune: Book One of the Guardians Trilogy 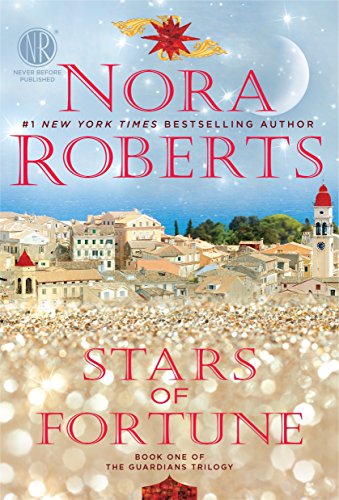 Anyone familiar with Nora Roberts’ work will find no surprises in this one. What is surprising is how she can take the same half-dozen scenarios and reinvent them into stories that are fresh, fun, and fast-moving—every time, over more than 200 novels.

The scenario for Stars of Fortune is a metaphysical battle between good and evil that has run through generations, to finally be resolved by a trio of couples with special powers. Each volume of the trilogy will focus on one of the couples and their fated romance.

This launch volume opens with Sasha, an artist and reluctant seer, who channels her visions into her paintings. These visions not only sell well enough to support her in a reclusive North Carolina mountain home, but also pull her away to, unexpectedly, the island of Corfu. There she promptly runs into the rest of the six—all of whom seem to be better informed than she about the Stars.

These special Stars, one of fire, one of water, and one of ice, were created ages ago by three benevolent goddesses to give to their new queen, who “will live a hundred years times seven. . . . And while she lives, there will be peace.”

But before the goddesses can pin the Stars to the moon, a jealous goddess, Nerezza, prevents secure attachment and promises that someday the Stars will “tumble from the sky with all their power, their wishes, the light and the dark combined.” And when they fall into Nerezza’s hands, “the moon dies for all and ever, and dark wins.”

Unable to prevent the ultimate falling of the Stars, the good goddesses cause them to fall at different time periods in different places so Nerezza cannot find them, or at least will have a heck of a problem doing so. Meanwhile, descendants of the good goddesses, resident on Earth, take up the quest to find them and restore them to their rightful place.

Each of the six has a unique power. There’s a seer, a witch, a werewolf, a mermaid, an immortal, and a time traveler. Combined they have the might to combat Nerezza and, hopefully, beat her to finding the Stars. In Book 1 they all pursue the Fire Star on Corfu; and while at it the seer, Sasha, finds true love with Bran, the witch.

A delightful aspect of this story is how matter-of-factly the troupe of otherwise normal, contemporary, young-ish adults handles the supernatural. Nobody faints or freaks out when people whip out big surprises, like shape-shifting or throwing lightning bolts. One of the most charming scenes is Sasha’s conversation with her werewolf friend while the friend is in wolf form.

Unlike other fantasy stories in which the characters are caught by surprise by magic or paranormal phenomena, five of the six in Stars of Fortune are already educated in such things and quick to recognize and utilize them to advantage. This allows the story drama to be in the action and the character development of Sasha, who’s the least informed and on a fast-track voyage of discovery. Her ability to roll with the punches makes her endearing and inspiring, while she maintains just enough innocence and resistance to be realistic.

So even while we know how the story is going to turn out, we don’t know the path it’s going to take to get there. Roberts treats us to her signature snappy dialogue, hot but tender sex, and intriguing, sometimes dangerous, situations to keep the narrative rolling. There’s no question that anyone who enjoys this volume will enjoy the next. Since the author is renown for her prolific output, fans won’t have to wait very long for Book 2 to hit the shelves.