The Starless Sea: A Novel 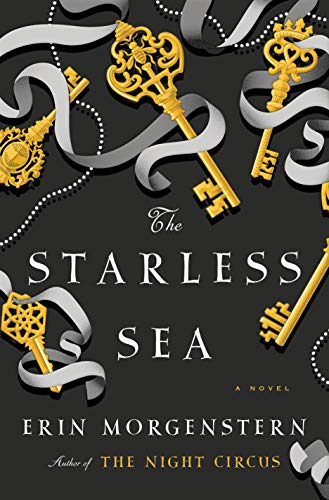 “As all good stories do, The Starless Sea immerses the reader in romance and adventure before finally arriving at a heart-warming, enchanting ending . . .”

Reminiscent of David Mitchell’s Cloud Atlas with its unconventional, time-warping plot, Erin Morgenstern’s new title, The Starless Sea, is not one story, but many woven together in a rich tapestry of love and loss, longing and joy, adventure and regret.

The main character, Zachary Ezra Rawlins, is a grad student haunted by a missed opportunity to open a magical door when he was 11. Ever since, he’s been studying stories in search of the essential truth behind the fiction that binds humanity.

One day, he finds a mysterious library book—or rather the book finds him—and he is thrust into adventure, fearful that he is the most unlikely and unprepared hero in the history of all heroes. But despite his doubts, he rises to the increasingly dangerous challenges until he finds himself stranded in the world of the Starless Sea, “a labyrinth collection of tunnels and rooms filled with stories. Old stories preserved while new stories spring up around them . . . It is a sanctuary for storytellers and story keepers and storylovers.”

After eons of preserving humankind’s stories, the Starless Sea itself is now at risk and the only way to save it is to reunite a pair of star-crossed lovers, Fate and Time, by restoring Fate’s lost heart, hidden inside a story secreted within a multitude of stories: “Puzzles and wrong turns and false endings, in stone and in wax and in smoke . . . narratives of what would happen, what might happen, what had already happened, and what could never happen.”

Zachary begins his quest with the naïve expectation that all he must do is solve a series of literary puzzles—second nature to a bibliophile like himself. But he quickly realizes that living inside a world of stories is not as benign as he’d supposed, in fact it can be life-altering—and potentially lethal. Because “change is what a story is, after all.”

Woven into Zachary’s fantastic journey through time, space, and fiction are fractured tales that when spun together weave a glimpse of the totality of the power of human imagination. As all good stories do, The Starless Sea immerses the reader in romance and adventure before finally arriving at a heart-warming, enchanting ending with a “long-awaited kiss upon the Starless Sea, tangled in salvation and desire and obsolete cartography. But this is not where their story ends. Their story is only just beginning. And no story ever truly ends as long as it is told.”

Readers who enjoy rich, luscious prose will sink into The Starless Sea like a luxurious bubble bath, delighting all of their senses. And once they finish it, they will find it difficult to resist the temptation to immediately re-read it so that they can see all the pieces of its puzzle come together.