The Star in the Forest 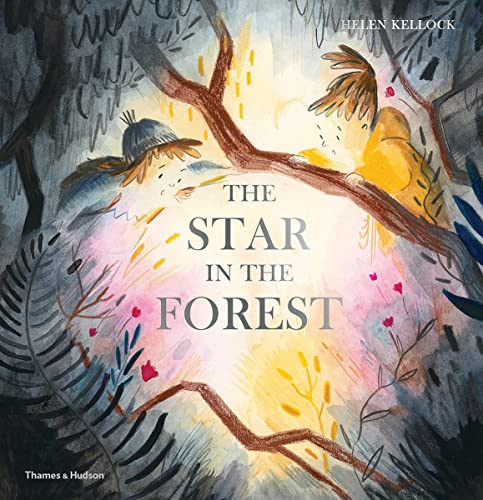 “some may ultimately find The Star in the Forest to be a wonderful delight. “

The Star in the Forest is a quick read into a sister-duo escapade. This is Kellock’s first project as a new author/illustrator based in Glasgow, Scotland.

Pip and Maisie get dropped off at Grandma and Grandpa’s house one lovely afternoon. As they settle in for the night, they ponder what to do and how to entertain themselves. Pip loves the peace, calm, and quiet. Maisie prefers action and adventure. When a bright light flashes out in the woods somewhere, they both feel the tug to find out what caused it, Maisie more so than Pip.

Wandering in the forest, one girl is rushing full steam ahead and one girl is dallying and apprehensive. Maisie bounds quickly, with purpose, through the dark forest. Pip gets startled by unfamiliar rustlings and noises caused in turn by a fox, owls, rabbits, deer, and squirrels. Maisie ignores the sounds and is intent on following the bright glow of the object of their hunt. She muses about all the possible options for what it could be: a rocket ship, an alien, a UFO, a space jewel.

Although the specimen in question has been emitting the brightest golden-orange light all during their hunt, so much so that it could be seen from various vantage points, by the time the girls arrive, the object is cold and dark. It is only a rock, “a lump of cold nothing.” Maisie is very much disappointed, but Pip sees more potential in their find and proclaims it a fallen star. Maisie buys into this interpretation and the two make their return (star in hand), leisurely this time among the animals, back to their grandparents’ cottage.

On the surface, this book is light and sweet, a fantasy tale for young minds. The reader will most likely concur with the various other reviews that this is a successful debut attempt for Kellock. And it may turn out to be just that. However, as much as this reviewer would like to agree, she has some misgivings in both story and style.

From the story aspect, it immediately seems odd that within moments of arriving at their grandparents’ house the girls, Maisie in particular, are bored out of their minds, having already done all they can think of to do, and the grandparents are nowhere to be seen. There is something that the girls are waiting on, but it is vague and passive. The grandparents never resurface, and we wonder what was the point of making this the setting for the story.

Moving on, we are told many things about the girls’ different personalities, and we are left to take the narrator’s word for it. We see Maisie’s face looking through a window and the text indicates, “Maisie dreamed of something exciting. A shiny new discovery! A spectacular adventure . . .” and she was just “willing something to happen.”

If only the illustrations had put us into Maisie’s mind, allowing us access to what it was that she imagines to be exciting. We see instead a girl who haplessly does nothing and seems entitled to being entertained by some other source outside of herself, taking no initiatives of her own. And alas, right on cue, she gets something to appease her.

Like clockwork, a flash on the ground suddenly appears. Maisie struggles to put on her sweater while announcing that perhaps a rocket ship made that light. Or maybe a creature from outer space.

They head out into the woods. The narrator lets us know that the girls had played there already. This also seems odd due to the fact that the girls had only just arrived that very evening. How could they have had a chance to play there often? In any case, while they are romping along, the question is asked about what may have caused that spark of light. But wait, didn’t Maisie answer this question before they even left the house? Pip, it seems, has no opinion one way or the other, she is only concerned that they are moving too fast.

As they bob and scurry through the forest, they look in some very unlikely places such as inside a dark log. Was not the light coming from the object super bright and out in the open? If so, why bother looking in dark areas? In lieu of locating the glowing object, they catch glimpses of startled animals, pausing picture perfect full-on in the beam of a flashlight. At times it is unclear if the light source is the flashlight, or the bright object they are tracking down. When they do stumble upon the supposed object, there is no difference between this dark rock and the other dark areas they had previously dismissed. What makes them think this rock is the source?

The illustrations twist and turn according to their search and the animals they find, but the story itself seems to be more about their imaginations, and by extension, their personalities. The disconnect between text and artwork results in some confusion, which threatens to tune out the reader. Placing dark text on top of dark images also interrupts flow and readability.

The unfinished illustration style feels shaky, almost a victim of the glare of overexposure mixed with a blur of an unsteady lens. The girls do not have actual faces and as a result have a spectral celestial aura about them; could they themselves be fallen stars?? It is also difficult to tell who is Pip and who is Maisie. These mysterious design choices conflict with the story instead of complementing it. There are many things going on in this book and they don’t necessarily pull together in a cohesive finish.

Of course, some readers have disagreed, resonating overall with the sisters’ “magical” adventure. It is possible that some may ultimately find The Star in the Forest to be a wonderful delight.