A Star Is Born (Turner Classic Movies): Judy Garland and the Film that Got Away 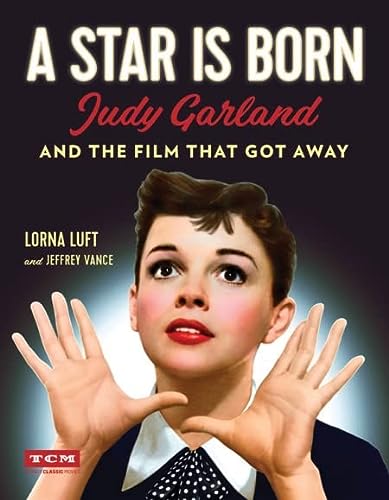 The recent retake on A Star is Born, with Lady Gaga and Bradley Cooper, got wonderful reviews. This 2018 release is the fifth version of a story that began in 1932, with a movie called What Price Hollywood? Who knew there were five versions of almost the same story?

Lorna Luft, daughter of the late Judy Garland and a celebrity in her own right, strongly believed the finest version was released in 1954 and starred her beloved mother. That version, the third, is deftly recounted in A Star is Born: Judy Garland and the Film that Got Away, by Lorna Luft and Jeffrey Vance.

What Price Hollywood, the first release from 1932, was directed by George Cukor and starred Constance Bennett and Lowell Sherman. This was fairly soon after the transition from silent films turned into “talkies.”

And, a short five years later, in 1937, the second version with a similar story but new title, A Star is Born, starred Janet Gaynor and Frederic March. Among other touches in this version was the use of Technicolor, a newfangled feature of Hollywood at that time.

Judy Garland’s version, the third—which is the focus of this book, began filming in the early fifties and was released in 1954. It was produced by Judy Garland and her then-husband, Sid Luft.

George Cukor was hand-selected by Garland to direct because, she remembered he helped stop a transformation she didn’t like back in 1939 when she starred in The Wizard of Oz. “They put a blonde wig on me and tried to change my nose . . .” Dark-haired Dorothy Gale worked out just fine, it seemed, thanks to George Cukor.

The pervasive theme throughout all versions of A Star is Born, but most importantly in Ms. Garland’s version is, according to co-author Jeffrey Vance, “. . . the consequences of the ascent of a new star, while her mentor, a major player in the movies, falls into decline and self-destruction.”

While the character Norman Maine (played by James Mason) was an alcoholic actor on his way down and Vicki Lester (played by Garland) was a rising starlet, the reality of what helped Garland connect with the script was her ability to better identify with the male character.

Garland’s addictions were no secret. Beginning with the filming of The Wizard of Oz when she was 16, studio executives pumped her with pills to stay in shape, awake, and for other selfish (and illegal) reasons. This addiction lasted until her death at age 47 in 1969.

A Star is Born premiered on September 29, 1954, a “shortened” version of 154 minutes, with critical, essential scenes cut out of the original 181 minutes. Luft said, “Mama was in shock when informed about the extent of the cuts.” Everyone thought Garland would win an Oscar.

Director Cukor believed, “The picture is totally fragmented. I think that accounts for why Judy Garland didn’t win the Academy Award.”

Through the efforts of many people, Luft was proud that the full 181 minutes were restored to complete A Star is Born for a new premiere at Radio City Music Hall in 1983, almost 30 years after its initial release.

A Star is Born, the fourth version, debuted in 1976. It was clearly significant enough that Luft devoted an entire section of her book to it. It starred Barbra Streisand (as Esther Hoffman—modernized from “Blodgett,”) and Kris Kristofferson (as John Norman Howard—with “Norman” to honor the original character, Norman Maine, from previous versions).

Barbra Streisand and Jon Peters (her occasional hair stylist and beau), co-producers, were given a $6 million budget. The well-attended premiere in December 1976 far surpassed the guests for the premier of Judy Garland’s 1954 A Star is Born.

However, the 1976 film initially got negative reviews, though, “With a domestic revenue of over $80 million, it became Streisand’s most successful film to date.”

A Star is Born: Judy Garland and the Film that Got Away is delightfully full of back story for the first four versions. Ms. Luft and Mr. Vance began their collaboration in 2010 and clearly did all it took to get the final product, a gem for Judy Garland fans, as well as for film buffs and Hollywood aficionados.

This semi-biographical book is everything you’ll ever want to know about Garland’s 1954 version but never thought to ask.

A spectacular treasure trove of color and black and white photos appear to encompass at least half of the book. They will enthrall the reader and provide a perfect glimpse into the life of Judy Garland as it paralleled the protagonist’s, Esther Blodgett, aka Vicki Lester, in the well-documented 1954 release.