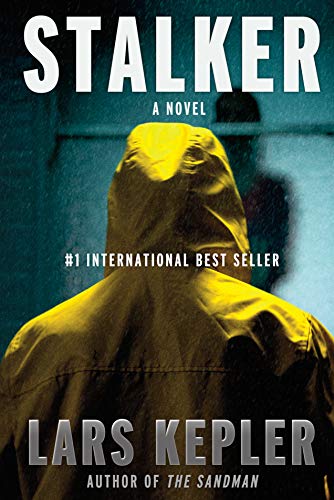 “Surprisingly, although Stalker is less than completely satisfying on its own, one can’t wait to see what happens next in this remarkable series.”

The last time we saw National Crime detective Joona Linna and Saga Bauer of the Swedish Security Police, in Lars Kepler’s outstanding novel The Sandman (2018), Saga discovered that Joona had disappeared from his hospital room without a trace. She’d just put several bullets into the notorious serial killer Jurek Walter and had pledged to find the body in order to assure Joona that the threat to his wife and daughter from the psychopath was finally over. The search for Joona lasted six months, after which only Saga kept looking, because she knew in her heart the detective was still alive.

Business must continue for the Swedish National Criminal Investigation Division, however, and the newest installment in the series, Stalker, opens with Detective Margot Silverman investigating the brutal murder of a woman who’d been filmed through her bedroom window shortly before her death. A link to the YouTube video had been sent to police, and it’s the first in a string of homicides Margot believes is the work of a serial killer who stalks and videotapes his victims before knifing them to death.

Along with her partner, Adam Youssef, Margot occupies Joona Linna’s former office. She never met the man and doesn’t really care whose it was before she came along as the new expert on serial killers and stalkers. She’s the daughter of the former commissioner, and she’s pregnant. Very close to term, in fact. “I’ll give birth when I’m finished with this case,” she keeps saying.

After Saga Bauer finds incontrovertible evidence that Jurek Walter is dead, she tracks down Joona Linna and convinces him to end his self-imposed exile. Inevitably, Joona becomes involved in Margot’s stalker case because she has reached out for assistance to someone well known to him—Erik Maria Bark, the hypnotist.

Stalker is another well-written addition to the series by husband-and-wife team Alexandra Coehlo Ahndoril and Alexander Ahndoril. It’s a bit of a challenging read, however, and doesn’t quite live up to its predecessor, The Sandman.

It’s dark and depressing, as all good Scandinavian noir crime novels should be. It features the sort of tight writing style the Ahndorils have been refining as they go along, including trademark one-sentence descriptive images that set the tone for many of their scenes. For example, while debating questions of justice with Margot, Joona thinks “the law chases justice the way Lumi used to chase fireflies when she was little.”

The decision to bring back Erik Maria Bark, furthermore, is questionable. The central character in the first novel, The Hypnotist, Erik remains a weak, pill-popping, mendacious excuse for a psychiatrist who tends to frustrate readers with his penchant for wandering off into the middle of the investigation to complicate matters unnecessarily. His use of hypnotism on a suspect is only slightly more than a plot device this time around. He’s just not a strong enough character to carry the weight the authors assign to him.

Margot Silverman is interesting, but one feels that the Ahndorils could have done a lot more with her than they have. She seems defined almost exclusively by her pregnancy and her grouchiness, which are interrelated. The fact that she’s in a same-sex relationship slips in and out without much being done with it.

However, the primary question that must be considered by fans of the series before reading Stalker is whether or not they’re prepared for what the authors have in store for Joona Linna. It’s a truism in popular fiction that treating one’s protagonist as roughly as possible throughout the novel will set up the story for a satisfying finale, but the Ahndorils have really gone to town on our intrepid detective in this one, with an almost brutal zest for punishment.

At the end of Stalker, readers are left with more questions than answers. Have we finally seen the last of the hypnotist, or are the authors much more fond of him than we are? Will Margot Silverman return next time out and develop into a more interesting, engaging character? What about Saga Bauer, already a very strong participant in the series?

And finally, do the authors really intend to follow through on the horrifying fate they promise us is in store for one of our favourite literary detectives, the talented and troubled Joona Linna?

Surprisingly, although Stalker is less than completely satisfying on its own, one can’t wait to see what happens next in this remarkable series.