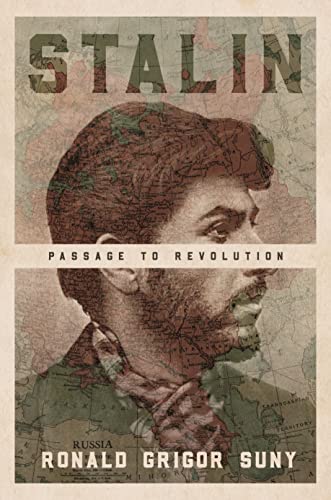 “Ronald Grigor Suny has written a massive, extensively researched biography of Josef Stalin’s early years—from his childhood days in Gori, Georgia, to the Bolshevik seizure of power in October 1917.”

University of Michigan history professor Ronald Grigor Suny has written a massive, extensively researched biography of Josef Stalin’s early years—from his childhood days in Gori, Georgia, to the Bolshevik seizure of power in October 1917. Suny’s goals in writing this book, he notes, are to “get closer to unraveling the deeper mysteries of Stalin and understand why a revolution committed to human emancipation ended up in dictatorship and terror.”

Stalin was born in 1879. As a child he was known as “Soso.” He was, Suny writes, an “ambitious and competitive” young boy. He was an “inveterate reader . . . liked to play jokes, tell stories, and laughed easily.” The Georgian Orthodox Church, Suny explains, “was central to Soso’s childhood.” He attended a church school in Gori, then entered the Tiflis Seminary with the goal of becoming a priest. Ironically, it was while he was at the seminary that Stalin lost his faith in God and found his new faith—Marxism/Socialism.

Suny details Stalin’s journey from seminarian to professional revolutionary. Stalin read Marx and Engels and other socialist writers. After he left the seminary, Stalin adopted what Suny calls “the peripatetic lifestyle of the rootless radical.” He had no permanent home and “lived outside the law.”

Revolutionary ideas had penetrated Russia during Catherine the Great’s reign, increased during the French Revolution/Napoleonic era under the reign of Alexander I, and surfaced in the political arena throughout the 19th century. Nineteenth century Tsars mixed reform with repression. Nicholas I crushed the Decembrist uprising in 1825. Alexander II freed the serfs in 1861 but was later assassinated by revolutionaries. Alexander III reacted with increased repression. Nicholas II, Russia’s last Tsar, alternated between semi-constitutionalism and repression.

After Stalin joined the Social Democratic movement in Russia in the early 20th century, he used the name Koba, after the character in Georgian writer Aleksandre Qazbegi’s novella Patricide. Suny writes that what likely attracted Stalin to the character Koba was that the story had “all the dramatic elements of a well-told adventure story.” Koba turned away from society’s comforts and became an outlaw in an unjust world. The story, explains Suny, presented Stalin “with a vision of Russian oppression and Georgian resistance that perfectly matched his own experience both in Gori and the Tiflis Seminary.”

Stalin wanted to be more than a radical intellectual; he wanted to become active in the resistance to the Tsarist autocracy. That is why he chose Bolshevism over Menshevism. The Bolsheviks were committed to armed struggle to overthrow the autocracy. For Koba, “romantic idealism” gave way to “passion for the revolution.”

Stalin was greatly influenced by Lenin’s message in What Is to Be Done? “Accommodation, compromise, and moderation,” Suny writes, “were thrown aside in favor of an impatient commitment to action.” Stalin admired and later shared Lenin’s “will to power.” Suny shows that Stalin’s commitment to the political struggle eclipsed the bonds of friendship, marriage, and love that he had formed during these years.

War breeds revolution. In 1904–05, Russia was at war with Japan—and the war was not going well. Workers’ strikes broke out in Russia’s cities. Stalin, writes Suny, “was deeply involved” in revolutionary activity in Georgia and the Caucasus. He wrote articles for the Bolshevik press, engaged in intraparty struggles with Mensheviks, and “led a clandestine armed band” that carried out robberies and assassinations.

Stalin, Suny writes, “was actively involved in the uncivil war of society against the autocratic state.” Stalin and other Marxists, Suny claims, used violence and terrorism “selectively and instrumentally, . . . coolly and rationally.” Georgia and the Caucasus exploded with violence. “Political struggle,” Suny explains, “had become armed resistance and retaliation.”

The violence was being committed in the name of the workers and peasants of Russia, but in reality it was part of the struggle for power between an increasingly timid and uncertain autocracy and groups who sought to replace the autocracy. Suny, perhaps because of his own socialist leanings, takes at face value the humanistic goals proclaimed by the Marxist revolutionaries. But there was little humanistic about the goals of Lenin and Stalin, as later developments proved.

The Russo-Japanese War ended with a negotiated peace, but Russia had been bloodied and the autocracy had been shaken. Nicholas II and his ministers responded by allowing the creation of a parliament or Duma. But Lenin and Stalin were not interested in sharing power—neither, for that matter, was the Tsar. Stalin spent many of the years leading up to the 1917 revolution in prison or in exile. He also became the Bolsheviks’ leading theoretician on how Russia’s different nationalities would fit into the socialist utopia.

When the First World War broke out, Stalin was in exile in Siberia. Many socialists in Russia initially supported the war. Lenin and the Bolsheviks did not. That war, too, produced a revolution in March 1917, after soldiers and sailors in Petrograd (now St Petersburg) refused to support the autocracy. Suny writes extensively about the jockeying for power among Russia’s political parties and factions, resulting in a Provisional Government that pledged to carry on the unpopular war and a Marxist opposition in the “soviets” that promised peace, bread, and land.

By that time, Stalin was back in Petrograd where he was the “de facto leader of the Bolsheviks.” Lenin would arrive later—courtesy of Imperial Germany who sought to use revolution to weaken its enemy. Neither Lenin nor Stalin were interested in joining the Provisional Government or sharing power. “For Lenin and Stalin,” Suny writes, “politics was war, and revolutions, like war, were ultimately decided by men with guns in the right place at the right time.”

In October 1917, the Bolsheviks seized power. That is where Suny’s book ends. We know what happened after that. Lenin institutionalized the instruments of repression and terror that Stalin later perfected. The Soviet regime killed tens of millions of its own citizens, enslaved and imprisoned millions of political opponents, extended its imperial rule to Eastern and Central Europe, and helped communize parts of Asia and other parts of the world. Bolshevik power lasted until 1989–1991.

For the author, however, the Marxist/Socialist ideal never dies. In the book’s conclusion, Suny laments that Stalin’s “humane sensibilities . . .  gave way to hard strategic choices.” “Empathy,” he continues, “was replaced by instrumental cruelty.” Once in power, Suny writes, “the imperatives of the new conditions in which Bolsheviks found themselves forced them to make unanticipated choices.” In an interview in 2014, Suny, like Vladimir Putin, described the fall of the Soviet Union as a catastrophe