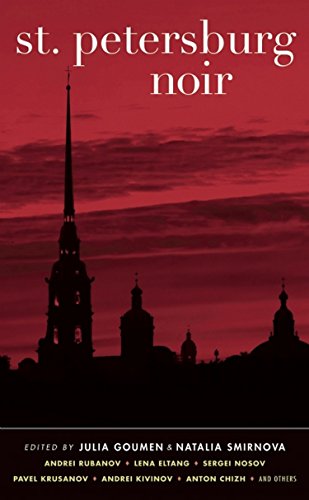 “Dark. Comic. Bleak. Menacing—it’s all between these pages.”

Following Moscow Noir, released to critical acclaim, this anthology highlights crime noir from Russia, specifically St. Petersburg, Russia’s second city, the natural background for this latest series considering the masters of early noir—Dostoevsky, Pushkin, and Gogol—all hailed from within the boundaries of the impressive metropolis.

The book is conveniently divided into three parts: Gangsters, Soldiers and Patriots; A Watery Grave; and Chasing Ghosts. Andrei Kivinov’s “Training Day” opens the collections, and Vladimir Berezin closes it with “Hotel Angleterre.”

“Training Day,” told in the first-person of cops on grisly duty, is filled to the brim with dark humor and keen irrelevance for the dead, the type that keeps sane those who would otherwise go insane when having to face death in many guises while on duty:

“What are we going to do?” Farid asked predictably.
“No idea. But I’m not writing up a report on him. I’ve already done it once.”

Farid lit up a cigarette. I bummed one off him and started to smoke too, even though I’m a health nut. We were silent for a while, thinking about the unusual circumstances we’d found ourselves in.

“We can’t leave him here,” Farid said, breaking the silence.

“Are you suggesting we take him to Evseyev? That’ll make him happy.
No, we’ll drop him at the morgue. It’s not far from here, next to the hospital.”

“We’ll load him into the glass and take him there. He’s tough guy, he won’t fall apart.”

Others stories are less humorous but no less poignant, leaning heavily on the classic downbeat image of pure noir.

Lena Eltang’s “Drunk Harbor” is an outstandingly stripped-to-the-bones tale. It may not make you smile, but it will make you think, long after you’ve read it.

Julia Belomlinsky’s thought-provoking “The Phantom of The Opera Forever” is wonderfully told in bursts of clipped paragraphs and stanza-like lines.

“The Witching Hour” by Alexander Kudriavstev tells the story of the thuggish lowlife, Anatoly, finally getting his bloody comeuppance in a most uncomfortable way imaginable. Justice can sometimes be as brutal as the crime. Not for the fainthearted.

There are plenty of other terrifically told stories in the collection, but each reader will discover their own, and for different reasons, no doubt.

Dark. Comic. Bleak. Menacing—it’s all between these pages. Crime noir has been well served by this indispensable and absorbing compilation of high caliber stories from some of Russia’s leading writers of the genre. Akashic Books must be commended not only for bringing such talent to our attention, but also for its dedication and commitment to noir in this marvelous series of anthologies.